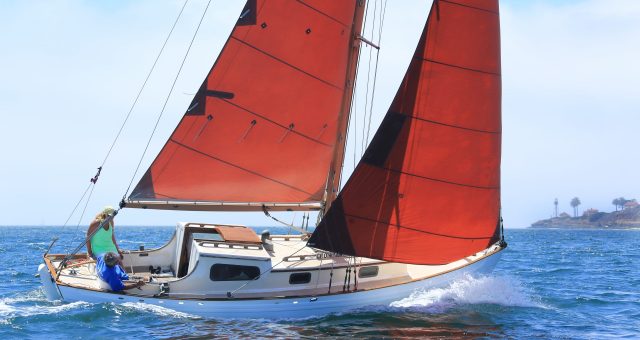 I am delighted to report that WoodenBoat Magazine have just published a completely new article about The Vertues in their July/August 2020 issue Number 275. Their commission last autumn enabled me to spend some serious time going back over my years of archives, and extending them to improve our understanding of how these tough little yachts developed. I have also spent time researching the context of their evolution and putting forward what influences Jack Laurent Giles might have been aware of when the first boats of the class were conceived.

I’m tempted to try and precis the article here but I’m not going to for two reasons. Some of the contents are already here on this website, and other information will be incorporated within it over the coming months. It should also be realised that the research for such an article produces far more facts than those which actually end up being used. So please keep watching this space!

VertueYachts.com, the website, has suffered as a result of my time put into producing the article. However, I have also been doing a bit of training to make the site more usable and reactive to the information that many kind Vertue owners have sent me over the past few years. I am pleased to say that I am now working through a new version of the ‘BOATS’ section and will be completely updating it as soon as I can. To begin with I am running it alongside the old version, called (The Boats) on the top toolbar, which is still running. However by clicking on ‘BOATS’ you will be able to find more information about those boats I have updated, and hopefully the whole database will soon become what it was always intended to be. However, whilst it is of course there for everyone to see, I can only put up the pictures and information that you send me, so please keep it coming!

Alongside my article in WoodenBoat magazine is another, sympathetically written, by professional writer Nic Compton about a recent refit that has been completed on Andrillot. She was the first boat to be built to the set of lines that links all the Vertues together and was commissioned in the autumn of 1935. Launched the following spring as a sprightly little gaff cutter she was very pretty with her short, low coachroof and very simple appearance on deck. Many years ago her rig was changed, the coachroof lengthened and the mast was stepped upon it. The photograph shows her present appearance.

At the top of this page is a wonderful photograph of SALMO, the twentieth Vertue, that was famously sailed by Peter and Jill Hamilton from Scotland to San Diego in California. This is one of several stunning images of her taken by Darrel Slater seven years ago when she was racing in the Yesteryear Regatta off that salty city. He is a very talented photographer and she is still owned by Larry Beilly who has simplified her rigging and is currently preparing to revarnish the coachroof and doghouse coamings.

Back in July 2017 we showed some pictures of the beautiful ‘Ocean’ Vertue called Northam Vertue, named after a maritime quarter of Southampton where she was built. She is also in the San Diego area of California and her owner Scot Copeland is looking for a new, sympathetic, home for her. If you are really interested in her please contact me or Scot(copeland@juesd.net). He has completed some beautiful joinery on her in the last few years.

Here in Britain another, famous, ‘Ocean’ Vertue is still for sale in Scotland. Icebird has been on the market for a while and is one of a very select number of what I always think of as rather elegant Vertues. I only have details of another eight of these boats, (but I think more were built) whose drawings were created alongside those of the Hiscock’s celebrated Wanderer III. The profile sail plan drawing below shows an uncanny resemblance to their more famous cousin, who of course was several feet longer.

Another interesting early Vertue for sale in England is Grace V 22. As she is in the middle of a major refit she is very cheap indeed. You can find her details on the Wooden Ships brokerage website but I am also very happy to help any potential purchasers as I have seen her in her barn workshop.

There are no less than four grp V II’s for sale in Britain at the moment, partly thanks no doubt to the current economic situation brought about by the virus. Virtue Voyager is also still for sale in Sweden, as described last year.

I was brought up in North Yorkshire, and as a boy my father and I used sometimes to sail his Vertue Hoitak down the coast to Scarborough, from her home port of Whitby. I knew that Jack Giles was born in Scarborough in 1901, but what I only recently found out is that another legendary yacht designer, Albert Strange, already lived there at that time. During my researches last autumn I realised that they both lived there for most of the first two decades of the last century, at the beginning and end of their lives, respectively. Albert Strange had moved to Scarborough to take up the post of Headmaster of the new School of Art in 1882 and remained there until he died in 1917.

I have yet to find any proof that they knew of each other’s existence, but Scarborough is not a very large town. Several Albert Strange cognoscenti, who now live in or near the town, have kindly offered to help me try and establish whether not these two yacht designers actually met. It is known that Giles said he decided to become a yacht designer when he was still at school……Unfortunately, although Jack Giles had written a draft autobiography before his rather early death in 1969, the manuscript was lost: what a treasure it would be, if it were to be found again!

Mike Elton, who completed one of those many unsung voyages achieved in a Vertue, has sadly died in Port Stephens on the east coast of Australia. His voyage from Britain to Australia, including the long single-handed passage across the Pacific, is one of the finest and least known achievements to be completed by the class. On reaching the Caribbean he took the engine out of Fialar to make more storage space for the priorities of food and water and eventually arrived in Australia in 1985. He became an apprentice shipwright, before teaching in Newcastle NSW for a while and then setting up a marine survey business in 2003. I am indebted to Bruce Morley, aboard the stunning Ocean Vertue, Tui of Opua, for this information, and here they are, above, on the slip at Port of Huon, Tasmania. I’m hoping to be able to write more about Mike, and Fialar V 110, in a future Newsletter. As far as I know she was the only Vertue that Robertsons built in Woodbridge, where she was launched in 1962.

There is a long tradition of Pacific ocean sailing in Vertues, which Shirley Carter and Speedwell of Hong Kong are continuing with style! Shirlz maintains a delightful blog about her wanderings and there is a link to it elsewhere on this site. Take a look and I can guarantee you won’t be disappointed! Of course Speedwell and Salmo were both owned at different times by Peter Hamilton, who originally sailed Speedwell from Hong Kong all the way back to the UK. She was subsequently sailed to South Africa which is where Shirely Carter bought and refitted her in 1998.

As we seem to have reported on four Ocean Vertues already this month, perhaps I might as well turn this Newsletter into an ‘Ocean Vertue’ Special Edition, without even trying! Keen-eyed readers will have noticed the pictures of John Aultman’s lovely Kea, V 142, in my recent WoodenBoat article. She is also now featured in my slightly updated section here on Vertue related Books. She’s a truly outstanding version of the class and was built by John Weir in Nanaimo BC, on the eastern shores of Vancouver Island. Her home port is now Olympia WA.

As can be seen from the original ‘concept’ profile drawing above, which was first published in Humphrey Barton’s book Vertue XXXV, the original rig for Ocean Vertues was a conventional bermudan cutter. Some have kept to this approach but others, including Kea here, have opted for the later Vertue II arrangement of a masthead bermudan sloop. She has a comparatively snug rig with twin standing backstays and no runners, as there is no inner forestay to keep tight and only one set of spreaders.

Whilst Shirley Carter opted for a fully battened junk rig (about which I will be writing in the future), another Ocean Vertue, Fionn V140, was built in Australia and was rigged as a gaff cutter from new. She was shipped to England some years ago and is based on the East coast, where she changed hands quite recently.

Another Hong Kong built Ocean Vertue, is also based on the East coast of England. Mea V 89 was sailed back to the UK by her first owner. She is as conventional an example there is of this type of Vertue and being built of teak will last for many years especially as she is also blessed with cast bronze floors.

Cilix, V 210, is one of the newest of the Ocean Vertues that I know about and is based on the River Fal in Cornwall. I had a delightful sail aboard her a few years ago with her kind owner Alan Keeble, and she regularly races with the fleet at Falmouth week, raising a few eyebrows with her speed.

Cilix was built in the Netherlands in the early 1990’s by the ingenious Gary Mulder, who constructed her in his attic! She was clearly beautifully built of wonderful materials.

I have always taken the view that one of the most endearing features of the Vertue class is that there are very few, if any, identical sister-ships. Perhaps the closest are those imported into the UK from the Cheoy Lee Shipyard in the early 1960’s. Before then, I think that there may be two or more very similar boats from the Elkins yard in Christchurch, and of course there is the steel Virtue V 61 with her one, or two sisterships. I don’t think the minor changes to the shape of the boats to create the Vertue Two design for grp construction mean that they are not Vertues.

Consequently, I am also quite happy to describe a boat built as a ‘one off’, using foam sandwich construction, to the ‘original’ pre-VII, set of lines as a Vertue. I also rather like Andrio’s tongue-in-cheek name, as an echo of the original Andrillot. She is owned by the Webbs who have looked after her since 1993 when they undertook a major refit, giving her a new deck and coachroof over three years. They completed an Atlantic circuit in 1999-2000 and have also sailed to St. Petersburg.

As can be seen, Andrio V 176, is a lovely looking boat, worthy of the name, and is rigged as an, all-inboard, masthead sloop, with only one set of spreaders and a central mainsheet to the bridge-deck.

As both of you can see, I have started to re-write the descriptions of a number of Vertues, updating and expanding the details that many owners and others have been kind enough to send me. Please start sending me more information to me at speedwelltwo@gmail.com Now that I am properly retired and have started to gain the skills to get the website active again, it depends more than ever on the input from the Vertue community. Thank you in anticipation of a great response.