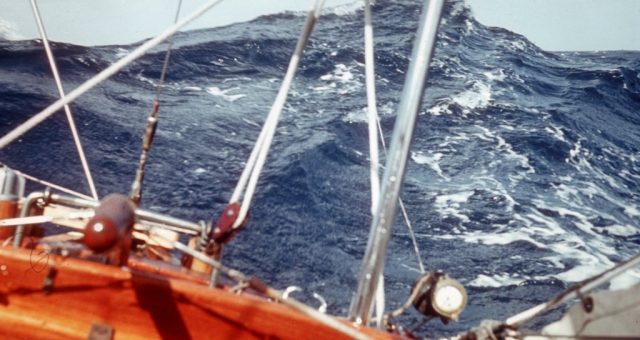 Just about now, half a century ago, when all the razzmatazz and the media sensationalism of the Golden Globe Race was more or less dying away, Peter Woolass was completing final preparations for his own singled-handed voyage.  It was not around the world, nor was it a race, but along with a growing number of competent, determined amateur yachtsmen, Peter wanted to see if he could sail across the Atlantic Ocean himself.  The book that resulted from the experience is described elsewhere on this website, and is a great yarn; almost ‘essential’ reading for Vertue enthusiasts.

Sadly, Peter died in 2015 but his boat Stelda V120 is still kept immaculately varnished, afloat, on the River Humber.  His family is keen that the voyage should be remembered and is looking for a suitable venue in which to mount an exhibition of some of the artifacts that were in common usage five decades ago: before the advent of any digital instrumentation.  Instead of GPS, satnav, WGS, grib files and AIS, there was EYES and the trusty Walker Log.  Such an exhibition would be a marvellous vehicle to show how the advances in yacht design and the development of ocean cruising equipment for the then new OSTAR and Golden Globe races were part of the enabling mechanism that allowed the more ‘ordinary’ sailing enthusiast to contemplate short-handed ocean passages.

By the time Stelda was built, the cover of the Cheoy Lee/Salterns yacht agency brochure no longer had the Beken photograph of Elkins’ Raumati on the cover, but now showed one of their own, Hong Kong built boats, Chinita V119.  Along with Stelda, Chinita was imported into the UK with eight other teak on ipol boats by the yard in 1963.  She was owned for nearly 20 years by Matt Power who did so much for the Vertue class and who remains a great inspiration to all Vertue enthusiasts.  Chinita completed two Atlantic circuits but it was not until the end of the century before Raumati followed in their footsteps.

Raumati leaves St. Lucia in the Windward Islands during her Atlantic circuit in 1998-9.

I have now sold Raumati to the owners of Doone, V46, who have decided against creating a fleet of Vertues and are reluctantly putting her on the market.  Please send any enquires to me at speedwelltwo@gmail.com and I will send on your interest to them.

Doone, is for sale.

She is a lovely boat and is now for sale for £18,500 which is a pretty reasonable asking price for a classic Vertue.  Francolin is also still available at this price; see the November 2017 Newsletter for details.

Doone under sail with her masthead genoa jib set.

After the series of post War design updates that extended the coachroof for’d of the mast and added the doghouse seen here in Doone, the next development was to lengthen this doghouse.   It was given two smaller windows, thus strengthening what had been shown to be a potentially vulnerable deck structure in extreme conditions, such as those experienced by Vertue 35 during her transatlantic crossing in 1950.  This is the configuration of Raumati and most of the Cheoy Lee built boats such as Stelda.  However, the first of these, my father’s Hoitak, was built to the earlier drawings, with the short doghouse, similar to Doone.

By the middle of the 1970’s grp construction had proved itself to be seaworthy and Laurent Giles & Partners prepared construction drawings for the Vertue II.  The first of these, Vertue Voyager is now for sale.

Vertue Voyager,  VII number 1 is for sale in Sweden.

Although over forty years old she is in fine condition and Wooden Ships Brokerage are marketing her with an asking price of £24,500.  She has been based in southern Sweden for several years now and must be an ideal boat for exploring amongst the skerries and islands of that coast.

Brochures from the 1980’s for the grp built Vertue II

The rich teak joinery shows the high quality of the interior that was beautifully installed into Vertue Voyager by Wilson and Bungay in 1979.

Ben Deveson’s lovely steel Vertue V61, built by Hitters & Proost in the Netherlands in 1954, may have one or even two other steel sister ships.  However I was recently contacted by Hanna & Thomas Schwendt, the proud owners of another fine metal-hulled  example of the class, Luana, V 219.

Luana V219 under full main & working stays’l in a stiff breeze.From this photograph it is difficult to tell that she has an aluminium hull.

Luana’s tough looking hull out of the water.

Luana’s owners are planning a cruise to the Danish South Sea this summer where she will clearly ‘lend tone’ wherever she goes.