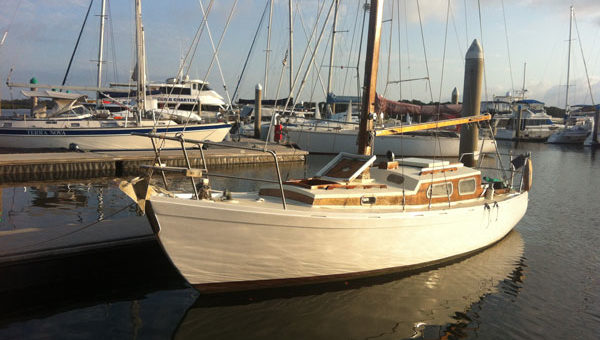 What has become of Gay Vertue, racing in 1953

The thing about a Newsletter is that sometimes there isn’t much news. My VertueYachts inbox has been strangely quiet for the past few weeks which only goes to show that even Vertue enthusiasts have another life around Christmas time, perhaps quite separate from their boats.

Of course, for some of us, the search for enlightenment continues, largely unabated, through the winter, and for me this was recently rewarded with the revelation of a proverbial ‘thousand words’ worth of information about Gay Vertue. This rather grubby cover image appeared amid a pile of old Yachting Monthly magazines from the 1950’s that I happened to be trawling through; as you do. Gay Vertue, V 43, is one of the numerous Elkins built boats of the time, and appears to be slipping along nicely in almost no wind at all. She was apparently racing, and can be seen here with her masthead genoa jib sheeted to perfection, her helmsman concentrating hard with the tiller almost amidships, while the crew prepare the spinnaker gear for the next downwind leg.

She looks as pretty as a picture to me but, much to the dismay of the owner at the time, another reader thought otherwise and, writing under the pseudonym of ‘Onyx P.Y.C.’ wrote a scathing letter to the magazine which Maurice Griffiths chose to publish. This ‘Onyx’ fellow lashed out at his perceived shortcomings of the boat, her rig, her trim, her crew and the generally unseamanlike way in which the poor little boat was being handled! The following month her owner, a D.C.Baker from Wareham, was then granted half a page of space in the ‘letters’ section of the magazine to effectively refute all the rather nasty criticisms of ‘Onyx’, and was ably assisted by another reader who described ‘Gay Vertue as ‘in fact one of the smartest in the class’. This crew certainly knew what they were doing judging by the ‘reefed’ boom gallows, carefully lowered to reduce windage and subsequent drag! Whilst today’s readers would probably be more interested in the political correctness of the name rather than such details as the stowage system of the main halyard fall, I am impressed by the vehemence of the correspondence and especially the rebuttal of the fatuous criticism.

Meanwhile, last month, Greg Currie wrote to us from Australia to say that his restoration of ‘Vera’, V 162, is coming along well and that he has put a film up on YouTube under his name, which he hopes everyone will enjoy. It’s about his trip to Bundaberg, which my atlas shows to be a coastal town way north of Brisbane in Queensland, where Greg keeps the boat. The film is balm to eyes accustomed to the low light and stormy days of our northwestern European winter: what a wonderful way to lift our spirits!

Before wishing everyone the usual seasonal greetings I have to just say that George and I hope that you’ve enjoyed the last few months’ Newsletters. There will probably be a break now for a few months as Patagonia beckons and I will be away travelling in South America for a while.

Best wishes for a Very Merry Christmas and a Happy New Year!