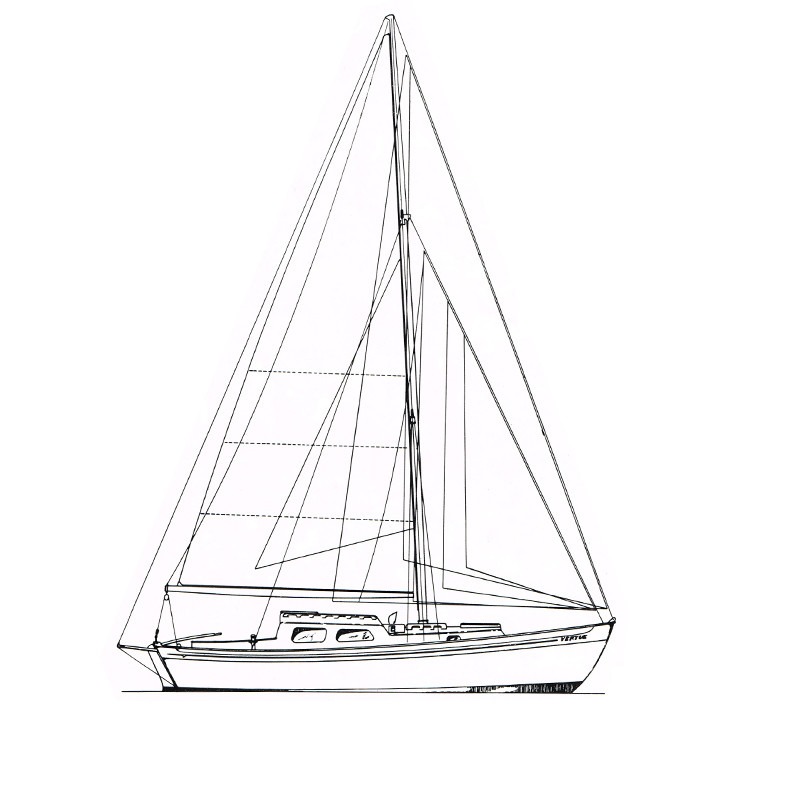 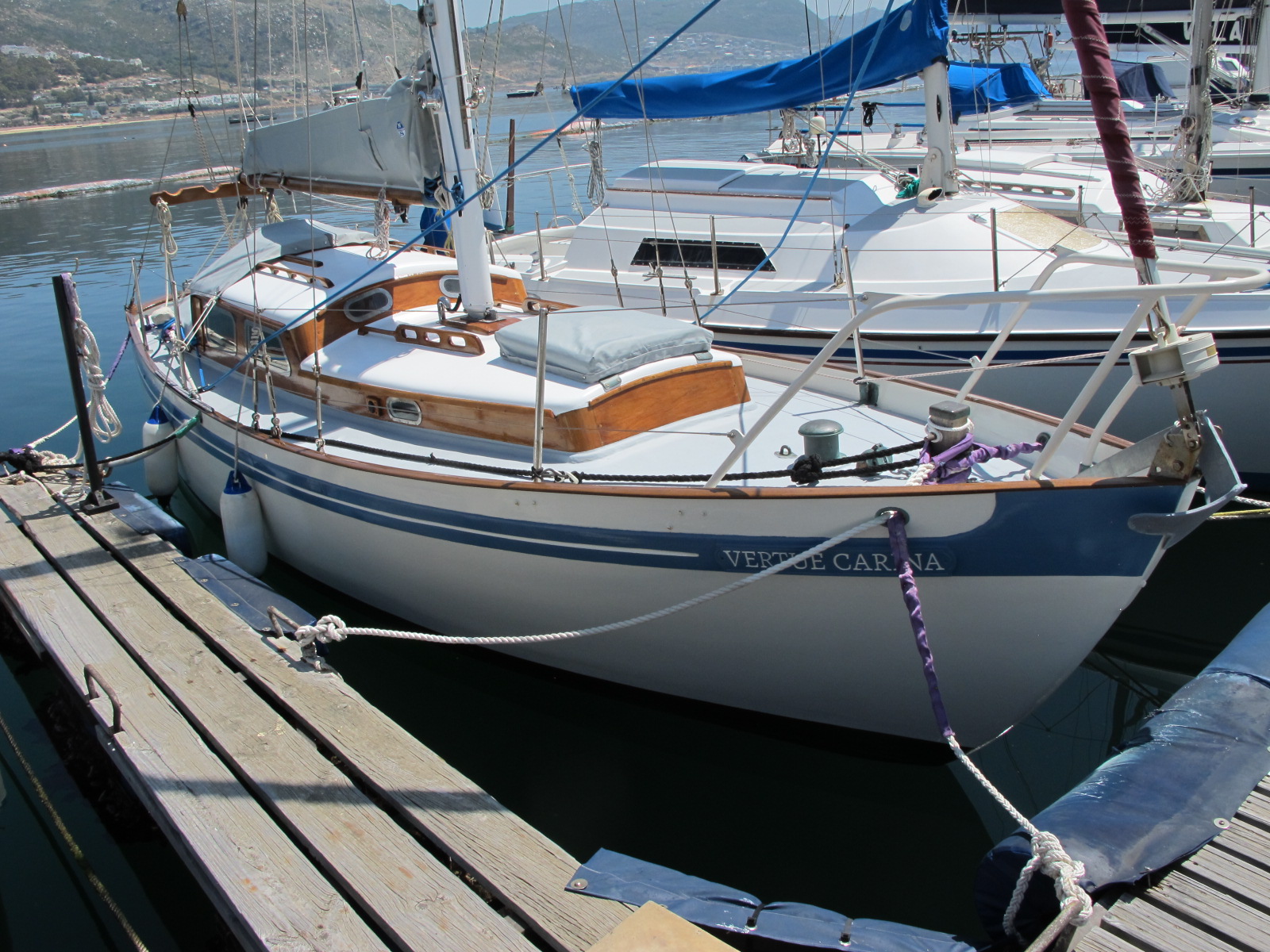 Vertue Carina now lies in Simon’s Town being gradually restored to her former condition by Daniel Brink, after a number of years of neglect by previous owners.   Her Cheoy Lee origin can be clearly seen in the lavish use of teak in the deckworks  and the high quality of the joinery. 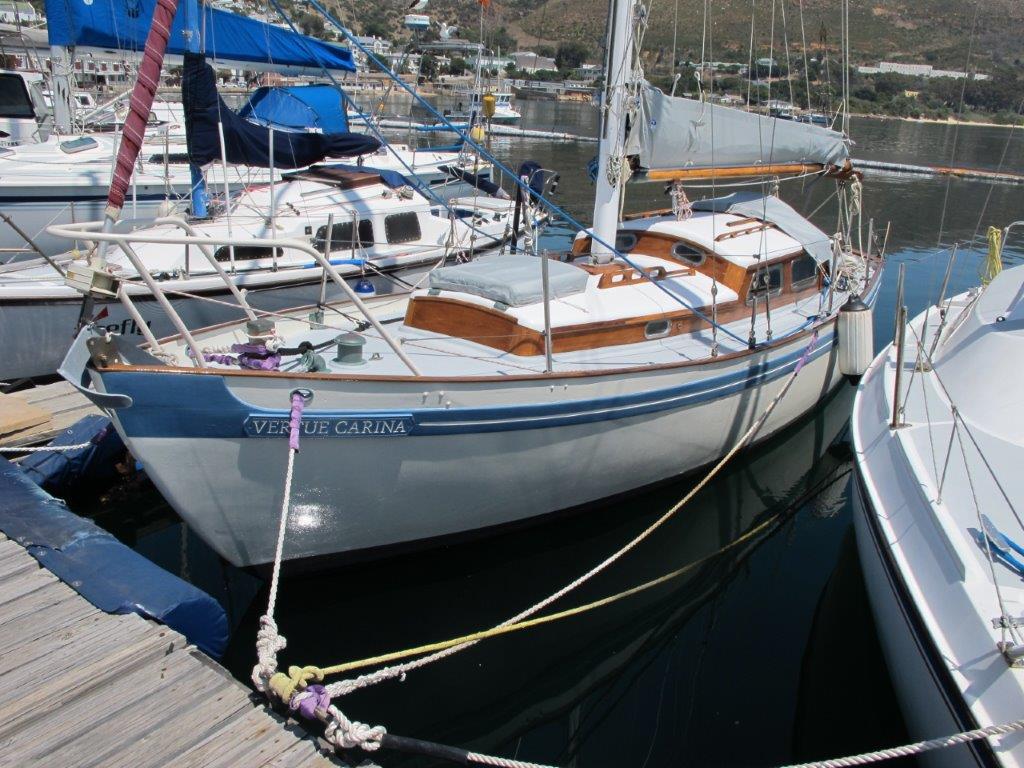 Vertue Carina’s rig has been modernised with the now common use of roller-furling masthead genoa jib and ‘stackpack’ type of mains’l system.

Vertue Carina was first commissioned to be built by the celebrated South African ocean racing sailor Bruce Dalling, in the early 1960’s.  He was serving in the Hong Kong police force at the time, and initially cruised with her, single-handed out of that British Territory locally, to the Philipines and southwards down to Indonesia and back.  By 1966 he was regularly crewing aboard such celebrated ocean-racing yachts as Stormvogel, and that year he sailed Vertue Carina single-handed again from Hong Kong and across the Indian Ocean to Durban.  Unfortunately as they were approaching the east African coast they were hit by a cyclone in the Mozambique Channel and pitchpoled the boat, damaging the mast and rigging.  However, Dalling was able to rig sufficient sail with a jury rig that he completed the passage to Durban, to much aclaim.  He was subsequently chosen to skipper the South African challenger,  the 50′ ketch Voortrekker for the third OSTAR, ( Observer Single Handed Transatlatic Race) in 1968.   He was narrowly beaten into second place after 27 days racing, by Geoffrey Williams aboard the 57′ ketch Sir Thomas Lipton.

Towards the end of 1969 a young couple from the inland state of Transvaal approached Bruce to ask if he would sell the boat to them so that they could fulfill their dream of sailing to Denmark.  John and Karen Cross had little sailing experience but were clearly tough and energetic and before long the deal was done and they moved aboard their new home.  That spring they sailed the boat down the notoriously dangerous coast to Cape Town for a final fit out before setting off to Europe. 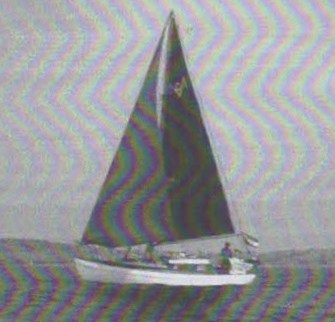 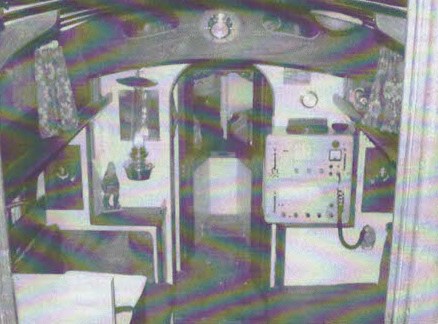 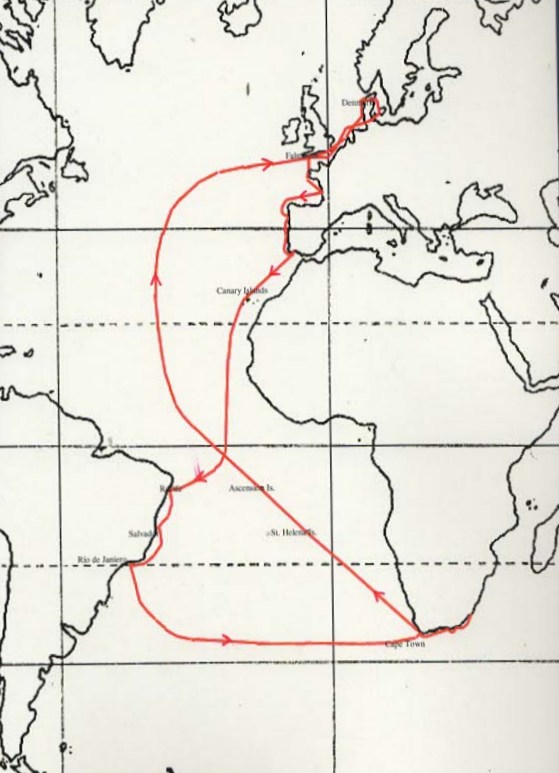 The route taken by Vertue Carina from South Africa to Denmark and back between December 1969 and April 1973.  This included spending many months working in Cornwall in southwest England, as well as some very long individual passages across the south and north Atlantic oceans.

It is proposed to describe this amazing voyage in greater detail in future and the great adventure that this young couple completed successfully with incredible grit, determination and faith.  Meanwhile, here is what I put in the March Newsletter earlier this year:

“Their plan was to sail to England and find work before continuing further north to meet up with Karen’s grandfather in Denmark.  Although he was born there, and had emigrated to South Africa, the plan was to meet up with the relations that had remained in the Lymfjord area and nearby islands. First of all there was the initial challenge of negotiating the infamous Aghulas Current on their way to Cape Town, before they could head north into the Atlantic on the warm, fair Southeast Trade winds.  Their ‘shakedown’ provided plenty of drama but through grit, determination and an unswerving faith, both in God and in the ability of their boat, they eventually made it to the Cape.  After several months of further preparations they left for St. Helena and Ascension Island in April 1970.  Their voyage to Europe and back was characterised by some unusually long passages, the first of which was from Ascension all the way to Falmouth: in 56 days non-stop!  Having resisted the ‘flesh-pots’ of the Azores the elation at finally achieving their destination must have been tremendous.

They made some good friends in Cornwall but decided that with the summer passing too quickly, they had to press on to their rendezvous in Denmark.   Meeting up with Karen’s grandfather and numerous relations was everything they could have hoped for, so they laid the boat up nearby and returned to Flushing, near Falmouth, to find work for the winter.  This they did and John was especially sought after as an experienced mining engineer.   The following spring they returned to Denmark and gave the boat another serious refit which included having a new mast built.  The old one had somehow, miraculously, held together for the thousands of miles of their passage north the previous year, but promptly fell to bits as it was lifted out for laying up!

The return passage to Falmouth was not without incident but God and the boat looked after them again, even when they spent several hours moored to the West Hinder light vessel for some rest and to beat the tide during a calm spell!  Another sociable summer passed, based again in Flushing, followed by another productive winter, for baby Peter Cross was born in Falmouth at the end of March, 1972! 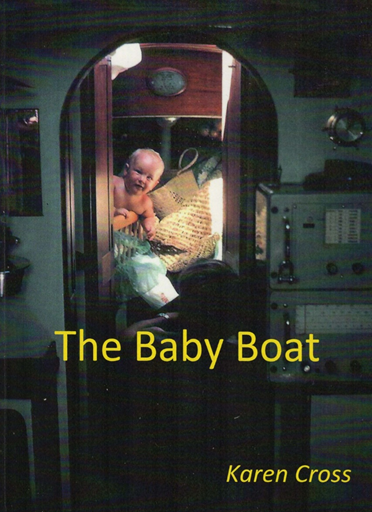 From here onwards the main character in the narrative is not so much their chunky little teak built boat, but the new ‘hand’ in the focsle.  They clearly had great difficulty in tearing themselves away from their new friends and Cornish way of life, where they had spent a lot of time with another young couple aboard Epeneta, one of the very early Vertues.  Their voyage back to Cape Town began in a very relaxed manner, coasting along the western seaboards of France and Spain.  But once they could see that young Peter was safer at sea than when exposed to the potential infections of the land, they lengthened their passages to the Canaries and Cape Verdes before setting out for Brazil.  Getting across the Atlantic at this latitude did not, in fact take very long, and they had some delightful cruising around Bahia and Isla Grande before the last, long, leg directly to Cape Town.  This 53 day passage became a real marathon, as not only did they have some pretty challenging, variable, weather but they had the equally demanding requirements of a small, teething, baby boy who must have worn them both out.  However, once again they fell back on their dual faith, in God and in the strength of their little ship, and came home again to South Africa after an outstanding voyage of discovery.

This very brief description of their magnificent achievement hardly does it justice. For several years afterwards Karen worked away on their ‘Baby Boat’ book which she used to help pass on the strengths of their Christian faith to numerous children she taught at their local school. So far it has only been printed privately but I hope that one day it will be able to be read more widely all over the world”.