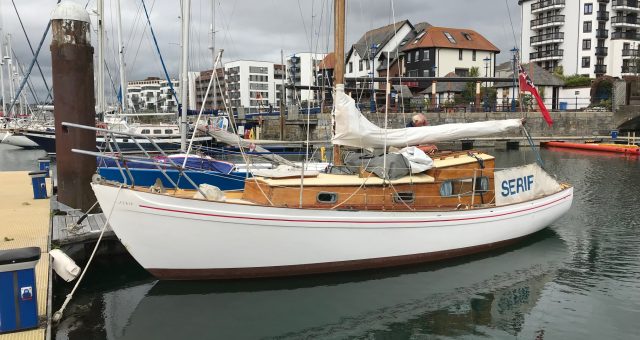 Vertue News continues to be sent from many corners of the globe and I am pleased to be able to report on a varied selection of boats this month. Of the three early ‘classics’ I feature, I’m afraid one of them may be in terminal decline. However, I also have good news of two ‘ocean’ Vertues, and updates about a trio of boats from the 1960’s. Finally, I can report on another three Vertue II’s, including one of the strip-planked boats which is now based in Captain Cook’s old home port of Whitby, on the north Yorkshire coast.

Now that VertueYachts is becoming more well-known I am sent more and more reports of Vertues falling on hard times. Here is Gay Caroline in happier times but she is now being offered, free, to anyone who is willing to take her on. The widow of her late owner in Italy has put the boat on facebook with a request for someone to take her on before it is too late to save her. I will publish a contact email as soon as I can, in the hope that someone will step in and save this lovely boat.

Poor Gay Caroline has been moored afloat, and although covered up, the harsh Mediterranean sun has seriously dried out her topsides.

From the photographs I have been sent it appears that Gay Caroline is not only a very early example of a long doghouse boat but she also has a 6′ long cockpit. This is a pretty rare combination as nearly all of the ‘long cockpit’ boats naturally have short doghouses.

Serif has the lovely sweeping sheerline of the early boats and a particularly distinctive doghouse.

I was recently invited aboard Serif in Plymouth by her owner John Suter. She was the only Vertue built by Cardnells, whose yard on the south shore of the Blackwater River in Essex produced many fine yachts. However they had their own ideas about doing things and an example of that is illustrated here by the unique interpretation of Giles’ standard design for the doghouse of the 1940’s!

Serif has a fine, deep and spacious cockpit which is reminiscient of those in the Lymington L class of boats, that Giles designed before the Vertues.

Here, below, is the cockpit aboard the Lymington L class Iduna, which is deep and safe with plenty of space but without the bridge-deck which was to become one of the signature design details of the Vertues. This in turn lead to most later Vertues having shallower, self-draining cockpits.

Jason racing in the Netherlands

Now that I have made some real progress with the Boats description pages I am being contacted by many more Vertue owners. With your help we are all making great progress in creating this up to date list of all the Vertues afloat. Diana Jeuda has sent some recent photographs of her beautiful Jason, a really classic Elkins-built boat from 1956. Diana has upgraded the boat over many years with great sensitivity and I do admire the way the rig has remained untouched. She has sailed many miles, mostly singlehanded, and has retained the original rig which is difficult to improve upon for serious cruising.

As snug a floating home as anyone could wish for, aboard Jason.

A proper chart table on Jason.

Speedwell of Hong Kong is skippered by another single-handed sailor, Shirley Carter, who has appeared before aboard VertueYachts. I can’t contain my excitement at the news that Shirley and Speedwell have just completed yet another amazing passage: this time from Fiji to Lombok. A quick look on the atlas reveals this to be a seriously long passage of around 4000 miles, including the necessity of running through the infamous Torres Strait, single-handed. Read all about it in Shirley’s blog Speedwell of Hong Kong .

Whilst Speedwell is, of course, the original Vertue built to the ‘ocean cruising’ design, a number of others have been built to the same drawings. She was immediately followed by Icebird, which is now for sale yet again, with Wooden Ships this time.

Patience of the Huon, V 153, is one of the Australasian ocean Vertues whose owner, Audun Pederson, has recently kindly updated me with her history. The full details of this will have to await the new Blue Book, but a short version is about to be posted under the boat’s page in the expanding database which can be accessed via the ‘BOATS’ button on the toolbar above.

Patience of the Huon is based in Tasmania from where the eponimous Pine tree originates.

This beautiful ocean cruising Vertue is unusual in having a full-length coachroof without the usual Giles ‘step’ in it. She is conventionally ‘masthead’ rigged with a simple furling genoa and an all-inboard backstay arrangement.

Patience on the slipway in Tasmania.

Patience is light and spacious down below thanks to her large coachroof and bright paintwork.

We are going to highlight several boats that make up the Australasian Vertue ‘Fleet’ in the Christmas Newsletter in December, but couldn’t resist this brief mention of another lovely Ocean Vertue this time.

Awaiting her mast, after the refit……..

One glance at this photograph would indicate a beautifully kept, probably pre-war, early Vertue, clearly built to the Monie drawings. However, there are one or two giveaways that this may not necessarily be the case. That low coachroof seems to have a slightly greater amount of camber than usual, and one would expect to see simple, round, portlights of that period. These look rather north American and the for’d end of the thickened sheerstrake is a detail used by a builder on the other side of the globe altogether. Any ideas? Answers in the Christmas Newsletter!

In the 1970’s the Vertue community were asked by ‘The Partners’ (at Laurent Giles) to comment on the proposal that perhaps it was time to make a plug and start moulding grp Vertues. The drawings, which had been amended many times since the major 1946 changes were introduced, were further modified to accommodate the moulding process and the different weights involved. A decade later the first was built, and over 40 more were completed by the end of the 20th. century. Meanwhile, in addition to the grp Vertue II’s, an indeterminate number were also built in timber, using both strip planking and cold moulding techniques. Ocean Rambler, shown here on her mooring in Whitby harbour, is one of these.

Her owner, John Anderson, kindly took my wife Frances and me for a sail one day in August. I was struck by how modern she felt and how different from the more traditional boats of the class. She slipped along in the light airs and usual choppy seas that this northeast coast so often seems to serve up, and seemed to be very stiff indeed: perhaps that was the difference. Of course everything on deck, and below, seemed to be quite lightly built, but her rig seemed snug, so perhaps with the extra beam, lighter construction, greater ballast ratio, and metal spars she was more…….efficient? Is this the Vertue of the future?

Heading back to Whitby after a lovely afternoon sail.

Outlander is now based in Western Scotland

I have a great affection for the appearance of some of the Vertue II’s, especially those, like Outlander, who accentuate the chunky ‘working boat’ feeling with their moulded sheerstrakes picked out in a contrasting colour. However I have yet to sail aboard one of those with this bowsprit arrangement and wonder where the centre of effort of the sailplan really is, once a jib is set on that bowsprit. Do they carry lee helm?

Delphic is based in Cork harbour in the south of Ireland.

One of the classic grp Mk II Vertues, Delphic is cherished by her owner, Mike Cheers, who frequently sails her on his own. This is one of several delightful photos he has kindly sent of his boat under sail recently, and we are really grateful for this kind of feedback from the worldwide Vertue community. With one of the finest cruising grounds anywhere, on his doorstep, he is indeed a lucky man. She represents the quintessential Bossoms built, Vertue II of the early 1990’s and looks ‘just right’ to my eye.

Keen readers of VertueYachts may remember that we were searching for details of Fialar last year in Australia. Sadly, she sank off Dangar Island, but thanks to Eulalie Elton we now have a selection of photographs of the boat, taken during her amazing passage to Australia from England in the 1970’s. Here is one, below, but look out for the next Newsletter before Christmas for much more news from down under…….

Fialar sailing after her passage from England to Australia.

If you have enjoyed these simple ramblings about the Vertue class of yachts, I hope you will spread the word about this modest little website. It would be even better to hear from you, so don’t be shy. Please note that the database of ‘known’ Vertues has now reached 150, and I am cracking on with it whenever time permits. There were about 230 Vertue sail numbers issued by the designers and a further 43 grp ‘Mk II’ boats……….so we’re about half-way there!