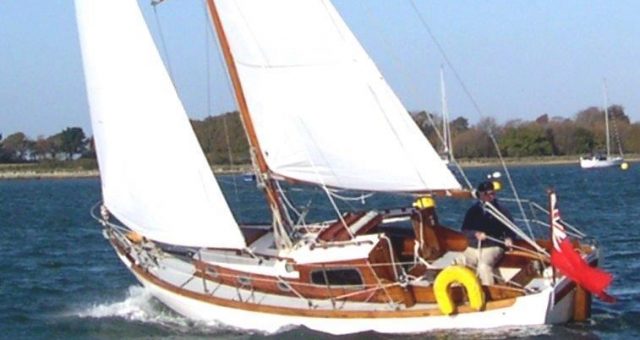 Many Vertues are now over 50 years old so it’s a pleasure to be able to report on the current project to restore one of the older boats, Grace. She is shown above enjoying a brisk sail. Following on from the somewhat controversial refit of Andrillot recently I can now also report that a real, gaff-rigged Vertue, Fionn, has come onto the market on our own East Coast. We also return to South Africa for the story of ‘The Baby Boat’, Vertue Carina and her remarkable voyage to Denmark. Finally we visit the US east coast for news of a wonderful opportunity to acquire a Vertue for free. Blue Jenny, a beautiful ocean Vertue project is being offered to anyone who is prepared to restore her. So, as usual, the Vertue Story continues along its worldwide course, connected as always by the seven seas!

I was recently contacted by Juan Pablo Olaberria who, with his fellow yacht designer Duncan Fawkes, is restoring Grace V22 near Lymington. Juan Pablo wondered if I could help with finding out something of the boat’s history. I had already seen the boat when she was being worked on here in Devon, several years ago and soon found some basic brokerage details in my archives from years ago. Luckily for me, and Juan Pablo, Catherine Dines of the Maldon agents M.J.Lewis & Son (see Link), runs a tight ship and an enviable archive, and in no time at all she had kindly whizzed through a wonderful selection of images. They date from before 2010 and will be invaluable for the accuracy of the restoration. This is a good example of the kind of information that yacht brokers have stored away in their archives. Perhaps if any other brokers would like to let us know what they have on past Vertues, we could then add the information to the database we are building on this website.

Whilst looking for information about Grace it gradually dawned on me that she was one of about a dozen older Vertues that were built to a modified version of the standard 1940’s/1950’s drawings. These describe quite a different layout from normal, with all the accommodation pushed further forward by 18″ because of the lengthened cockpit which is 6′ long rather than 4′ 6″. The short doghouse remains the same but with the engine now entirely accommodated below the bridge deck the companionway ladder descends straight down to the cabin sole. The resulting feeling of spaciousness in that area of the boat, between the galley and chart table is remarkable.

When Stebbings of Burnham were building Festival Vertue for the Festival of Britain in 1951, they also built to these drawings. She appeared in last October’s Newsletter and the more spacious cockpit can clearly be seen in the photographs there. Clearly this longer cockpit arrangment was better suited to those owners who wanted to use their boats more for day sailing and racing, than extended cruising. The emphasis was on space on deck, rather than the provision of maximum accommodation below.

Juan Pablo and Duncan have taken on quite a challenge with this boat and we wish them the best of luck with it. They have started this blog: https://saving-grace-1947.blogspot.com/

In the July Newsletter last year we showed a photograph of the gaff cutter rigged Fionn V 140. There are several cold-moulded Mk II gaff cutter rigged Vertues which seem to suffer from a slightly ungainly, higher after end to their ‘ocean’, stepped-coachroof. These boats seem to me to have lost the elegance of the earlier, lower, stepped coachroof, similar to that on Wanderer III, which is a shame. Fionn’s coachroof looks just right.

The owner of Fionn, Steve Wood, has decided to put her back on the market and I’m sure she will look wonderful under sail again. She was built in Australia by C. Larrewyn and launched in 1974. Steve had her shipped to the UK in 1997.

Fionn is an unusual Vertue, being rigged as a gaff cutter, and she retains the appearance of her working-boat roots more clearly than most. I like her proper bowsprit bitts, channels to take her main shrouds and the round portlights in her coachroof. She’s a proper little ship! The practicality of being able to run in her bowsprit, in these days of outrageously high mooring charges, is a particularly attracive feature. If anyone wants more information about the boat please contact me at speedwelltwo@gmail.com

In Britain we tend to think of the group of Cheoy Lee, Hong Kong built Vertues that arrived here in the early 1960’s as a local phenomenon.  However a number of sister ships were built by the Chinese yard and delivered to other parts of the world, especially to the US west coast.  A third group were also ‘delivered’ on their own bottoms to their new homes.   Mea, an ‘ocean’ Vertue, was sailed to the UK by her first owner in 1960.  Speedwell of Hong Kong, another ‘ocean’ design, had actually been built by the nearby yard of Wing on Shing, and is well known for having been sailed to the UK by Peter Hamilton in 1953.  The following year Speedwell was sailed single handed by her new owner, John Goodwin, back to South Africa where she remained for many years until Shirley Carter took her cruising again!

A decade or so later, another young South African yachtsman, called Bruce Dalling, sailed his new Cheoy Lee boat Vertue Carina single handed back home.  He visited the Philipines, Singapore and the Seychelles but was hit by a cyclone in the Mozambique Channel and limped into Durban under a jury rig.  However, his outstanding seamanship resulted in his being chosen to skipper the South African entry, Voortrekker, the 1968 OSTAR.  He put in a great performance by finishing second, close astern of Geoffrey Williams in the larger ketch Sir Thomas Lipton.

While Bruce Dalling became immersed in the world of Ocean Racing, Vertue Carina swing to her mooring, unused.   Meanwhile, a young couple called John and Karen Cross, with a dream of sailing to Europe, were looking for a suitable boat and fell in love with the sturdy little ship.  They made an offer, this was accepted, so they sold most of their belongings and moved aboard in December 1969.

Their plan was to sail to England and find work before continuing further north to meet up with Karen’s grandfather in Denmark.  Although he was born there, and had emigrated to South Africa, the plan was to meet up with the relations that had remained in the Lymfjord area and nearby islands. First of all there was the initial challenge of negotiating the infamous Aghulas Current on their way to Cape Town, before they could head north into the Atlantic on the warm, fair Southeast Trade winds.  Their ‘shakedown’ provided plenty of drama but through grit, determination and an unswerving faith, both in God and in the ability of their boat, they eventually made it to the Cape.  After several months of further preparations they left for St. Helena and Ascension Island in April 1970.  Their voyage to Europe and back was characterised by some unusually long passages, the first of which was from Ascension all the way to Falmouth: in 56 days non-stop!  Having resisted the ‘flesh-pots’ of the Azores the elation at finally achieving their destination must have been tremendous.

They made some good friends in Cornwall but decided that with the summer passing too quickly, they had to press on to their rendezvous in Denmark.   Meeting up with Karen’s grandfather and numerous relations was everything they could have hoped for, so they laid the boat up nearby and returned to Flushing, near Falmouth, to find work for the winter.  This they did and John was especially sought after as an experienced mining engineer.   The following spring they returned to Denmark and gave the boat another serious refit which included having a new mast built.  The old one had somehow, miraculously, held together for the thousands of miles of their passage north the previous year, but promptly fell to bits as it was lifted out for laying up!

The return passage to Falmouth was not without incident but God and the boat looked after them again, even when they spent several hours moored to the West Hinder light vessel for some rest and to beat the tide during a calm spell!  Another sociable summer passed, based again in Flushing, followed by another productive winter, for baby Peter Cross was born in Falmouth at the end of March, 1972!

From here onwards the main character in the narrative is not so much their chunky little teak built boat, but the new ‘hand’ in the focsle.  They clearly had great difficulty in tearing themselves away from their new friends and Cornish way of life, where they had spent a lot of time with another young couple aboard Epeneta, one of the very early Vertues.  Their voyage back to Cape Town began in a very relaxed manner, coasting along the western seaboards of France and Spain.  But once they could see that young Peter was safer at sea than when exposed to the potential infections of the land, they lengthened their passages to the Canaries and Cape Verdes before setting out for Brazil.  Getting across the Atlantic at this latitude did not, in fact take very long, and they had some delightful cruising around Bahia and Isla Grande before the last, long, leg directly to Cape Town.  This 53 day passage became a real marathon, as not only did they have some pretty challenging, variable, weather but they had the equally demanding requirements of a small, teething, baby boy who must have worn them both out.  However, once again they fell back on their dual faith, in God and in the strength of their little ship, and came home again to South Africa after an outstanding voyage of discovery.

This very brief description of their magnificent achievement hardly does it justice. For several years afterwards Karen worked away on their ‘Baby Boat’ book which she used to help pass on the strengths of their Christian faith to numerous children she taught at their local school. So far it has only been printed privately but I hope that one day it will be able to be read more widely all over the world.

Last summer I was talking with Uli Killer aboard his newly acquired Andrillot, when a chap came along the pontoon and told us how his grandfather had had a Vertue called Blue Jenny built, many years ago. I looked through the archives and found that she was number V49. Shortly afterwards, two wonderful old photographs appeared, attached to an email from Nick Drewett. Here is one of them:

Several months later I was alerted to a ‘post’ on facebook by a kind American friend who wondered if I had seen it.

Blue Jenny is now owned by Patrick Otton near Harwich, Cape Cod in New England. Although Patrick has owned her for many years he has now decided to part with her and allow someone new to take on the completion of her restoration. She apparently still has a lot of major work to be done to get her to sea but she’s a fantastic ‘ocean’ Vertue which Patrick is willing to donate to anyone with the skill and enthusiasm to complete the work. Just like Grace, she is a major project, but what a beautiful boat to take on! Please contact me at speedwelltwo@gmail.com if you are interested.