An attractive feature of the Vertue class is the degree of individuality in the appearance of the different boats.

Since the conception of the jaunty little gaff cutter Andrillot, which was launched in 1936 and was to become Vertue V1, the fundamental design of the boat has been continuously modified. However, not all the boats built have followed this central path of design development, and there have been a number of alternative options offered by the designers. In particular this has related to the sail plan, coachroof and doghouse design and to the internal accommodation layout. Freeboard, extreme beam and sheerlines have also changed but the fundamental shape of the boat has remained constant.

We are planning to explore the design development of the Vertue class in the future, but to illustrate the variable nature of a ‘genuine’ Vertue, here are seven of the more common sailplan examples that have been used. This selection is by no means comprehensive and we would be grateful for feedback on this aspect of Vertue design. Having seen photographs of ‘junk rigged’ examples of the class, including Speedwell of Hong Kong and one of the GRP Vertue II’s we would be delighted to be able to illustrate these variations in the future. 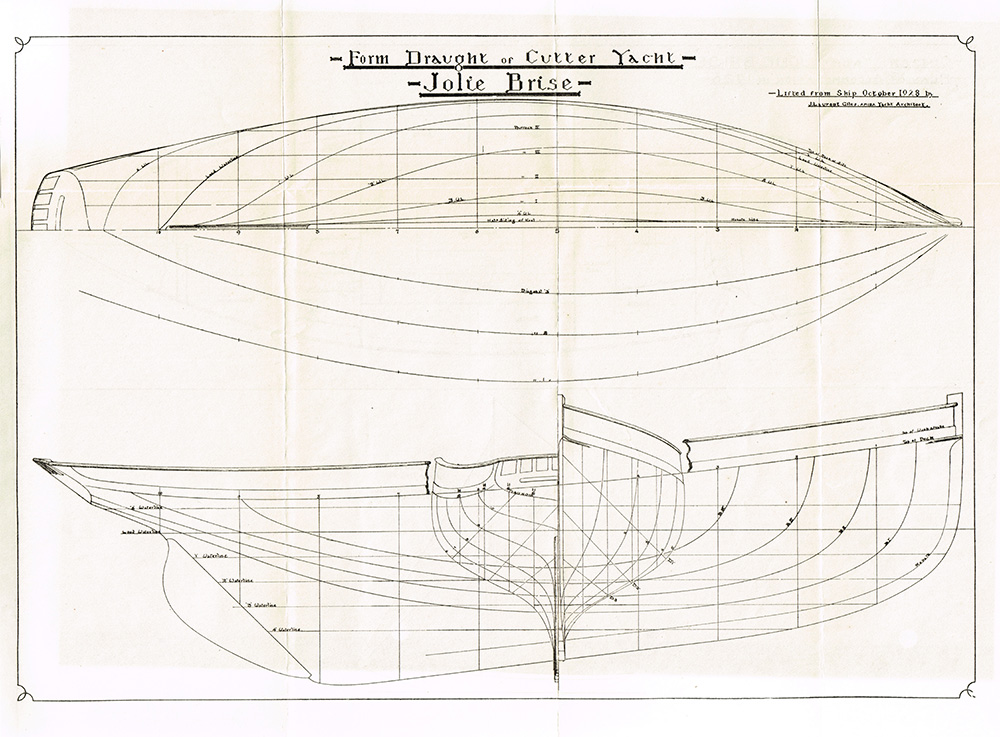 Where better to start a consideration of the genesis of the Vertue class than with this ‘Form Draught of the Cutter Yacht Jolie Brise’. This exquisite drawing by Jack Laurent Giles was made after he lifted the lines from the yacht in 1928. Whatever his motive for doing this, they cannot have failed to influence his thoughts and ideas in later years.

Jolie Brise was conceived in the design office of Monsieur Paumelle in Le Havre and was launched as a working pilot cutter serving that port. By the time Jack Giles was able to measure her hull shape she had achieved a formidable reputation as the boat to beat in the newly emerging sport of ocean racing. Her owner, founding father of Royal Ocean Racing Club, raced her on both sides of the north Atlantic, and she continued to win races even after she changed hands. Jack Giles was clearly intrigued to see where the secret of this success lay and the beauty and perfection of these lines rewarded the quest.

A direct comparison of these lines with those of Andrillot shows no striking similarity, of course, excepting that both display very high levels of fairness, especially in the buttocks and waterlines, slackish bilges, and very fine runs. Jolie Brise has more beam and more draft, proportionately, and all her ballast was inside, and there is the thickened sheer strake which was to become one of the defining details of many future Giles designs. But the outstanding impression in both cases is of a high degree of that illusive quality, of beauty and utility combined, whereby any change would lessen the harmony and perfection of the whole.

No designer operates in a vacuum and there is no doubt that Jack Giles must have been interested in other yacht designs that were being produced during the late 1920’s and 1930’s. We will be identifying some of these in due course, but the slippery Le Havre pilot boat that he studied so carefully in 1928 cannot have failed to influence his thoughts when creating some of his later heavy displacement yachts, including what was to become the first Vertue, Andrillot.