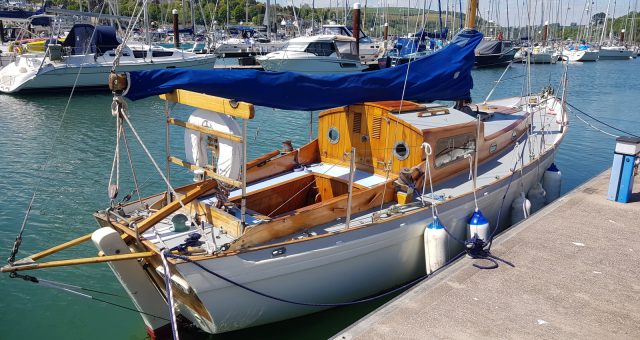 Virtue Fidelis, seen here, is a very special boat. She was commissioned by Stanley Glanfield in 1951 just when a committee of experts were looking for special exhibits for the forthcoming Festival of Britain in London. Her builders, Stebbings, of Burnham on Crouch, must have been delighted when she was chosen to be one of those outstanding exhibits to illustrate the best of British craftsmanship. She was launched as Festival Vertue.

Since then, she has had very few owners, and is now based in Dartmouth where she has been racing in Start Bay during the summer regatta. Here she is seen getting into her stride below the famous daymark off the entrance to the river Dart.

Further details about the boat can now be seen in The Boats category on the toolbar above, where we are steadily updating all the information we have on existing Vertues. This is now a flexible system which I can easily update further once the boats are entered into this part of the database. So do, please, let us have more information about your boat. If any readers wish to contribute news and information, and be quoted verbatim in future Newsletters, please let me know your thoughts and news.

My father’s Vertue, Hoitak, was exhibited at the Earls Court Boat Show in London in January 1963. I have written in the past about how I had lost track of her in recent years. Now, thanks to the kind efforts of Laura Duchniki who has been staying aboard the boat in Lymington, I’m now in touch with her current owners who are clearly looking after her beautifully.

There are not many Vertues for sale in the UK at the moment but two of them are excellent examples of their different types. The first is Contessina V 121, another Cheoy Lee built boat that was imported into the UK after Hoitak was displayed in Earls Court. She has been beautifully maintained and is now on the market for £21,950 in Wales.

She has had a rather sheltered life as a cruising boat compared with many Vertues and is planked in teak with large parts of her structure also built with this superb timber.

The second boat on the market is a grp Vertue II based in Scotland. She is called Magic of Shiel and was built and completed by Bossoms as VII 20 in 1989. She is another fine looking boat and appears to be ready to go anywhere. She is for sale at £22,000.

I consider myself a lucky man to be able to follow this passion for the brilliant designs of Jack Laurent Giles and to perhaps illuminate how they were created over time. I have recently been concluding that the drawings of Andrillot were slightly modified to create the lovely Sally II but that her slight deviations from Andrillot were ironed out with a new set of drawings for the third boat Monie. Here, I thought, is the quintessential early Vertue with her strong, flexible bermudan sailplan, low freeboard, lively sheer accentuated with that signature sheerstrake, and that exquisite simplicity throughout. So, I thought, it follows that all the rest of the early boats would have been built to Monie’s drawings until the startling changes to the design that were introduced in 1946 with the creation of No.12, Kishti. Her coachroof now extended to include the fore hatch, with a doghouse aft, and the mast was stepped on top of it. The cunning structural engineering that enabled this to work was only matched by the way in which the old ‘pilot cutter/fishing boat’ character was still intact. Was this partly down to the thickened sheerstrake? I’m inclined to think so. But I may well have been wrong about the actual drawings used until then.

The year before Kishti’s design, Jack Giles had been asked by the elderly childrens’ author, and ex-spy, Arthur Ransome to design him an easily handled cruising ketch. Whilst she was being built by Harry King, in his old wooden shed at the top of the hard in Pin Mill, another smaller Giles design was also under construction alongside. The chunky hull of Ransome’s new Peter Duck must have towered above the smaller Maid Meriel and her signature thickened sheerstrake would have accentuated her working boat origins, as it had done for nine Vertues already. Whether or not this visual chunkiness influenced Colonel Busk I cannot tell, but the Maid was built without it and a close sister-ship to Sally II was the result.

She spent many years on the south coast and was called Karesta Ferida by the 1970’s before she was shipped over to the east coast of USA. She is now owned by the celebrated mariner and expert Ship Modeller, Dominic Zachorne, who lives aboard another classic boat in Wickford RI. He refers to the boat as The Maid which seems to be more appropriate than the rather obscure alternative.

It may well be that other Vertues were built without the Giles signature thickened sheerstrake, but nearly all the early boats were built following the character of Andrillot and her successors. Her ‘working boat’ ancestry is more difficult to recognise but she has perhaps a slightly more ‘refined’, delicate and yachtlike appearance.

I am deeply grateful to Nic Compton who has very kindly let me use and share these two wonderful photographs of Andrillot. He accompanied her out into Start Bay recently with his camera, as she prepared for a shakedown cruise up Channel to the Netherlands after her latest deep refit here in Devon. She proudly flies her new German ensign and looks to be in pretty good shape.

Is there a danger of becoming over-precious about some of our so-called ‘classic’ yachts? I’m sure I am as guilty as anyone on this point. I have to admit to having been upset by Andrillot’s recent deep refit which seemed to me to have been a missed opportunity to return her closer to her origins. Her short coachroof was lengthened years ago which significantly altered her appearance, although stepping her mast upon it has made a great deal of difference to her accommodation. After all, as we have seen, Kishti was designed like this in 1946. But was it right to do this to Andrillot: Vertue number one? The rig too seems to me to be strangely proportioned and I can’t help feeling that with the centre of effort moved so far forward that the boat may end up with significant lee helm. We shall have to see what her new owner, Uli Killer, has to say about that.

I have pondered this question of ‘authenticity’ long and hard recently and wonder if it really matters. Should sailing yachts be treated as museum artifacts or as privately owned playthings for their owners? Part of the answer must lie in whether or not the drawings still exist for the object in question and in the case of a Vertue the answer is yes. Therefore, it can be argued, that since a new Andrillot could be built tomorrow, from scratch, to her original drawings, it doesn’t really matter what happens to this ‘version’ of the yacht. Therefore, surely it is entirely up to Uli whether or not he should ‘restore’ the boat back to her original appearance, complete with gaff cutter rig, no engine, and a short coachroof.

I would be delighted to hear from any readers that care to enter into a discussion about this issue. It is interesting to note that Virtue Fidelis is one of only two Vertues ‘listed’ on the ‘national?’ ‘Small Boats Register’. She was put there by her earlier owners but what does it actually mean, and will there eventually be bureaucratically controlled limitations on what owners can or can’t do with their own yachts?

I’m pleased to say that after several enquiries from Vertue owners, I have arranged for our local sailmakers in Kingsbridge to supply Vertue Owners ‘house’ flags, for anyone who would like to order one. I do not claim to run an ‘association’ as such, but in its absence I felt that this might be helpful. These flags are very well made with proper materials. Hoist about 11″ x 20″ length. They cost £30 inc. vat, plus postage. Please email me if you would like one.