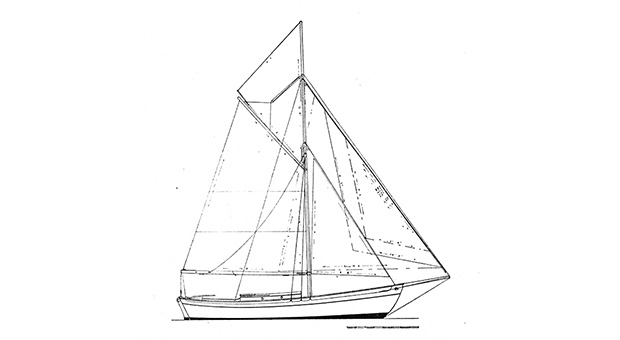 Above: Andrillot Sail Plan as redrawn by Uffa Fox.

This little gaff cutter Andrillot was launched at the Swanwick yard of Moody Bros. for Richard Kinnersley in the spring of 1936. Although she was later to become known as the first of the Vertue class, her rig was very similar to that of her first rival, Eric Hiscock’s Wanderer II.

When the two boats raced each other, and later sailed in company, Andrillot was found to be slightly faster to windward, with her slightly longer waterline length and fuller sections. Eric also explained that he couldn’t really expect ‘a remarkable performance to wind’ard’ because of her ‘ratlines, a quantity of baggy-wrinkle and gear for working twin spinnakers’! 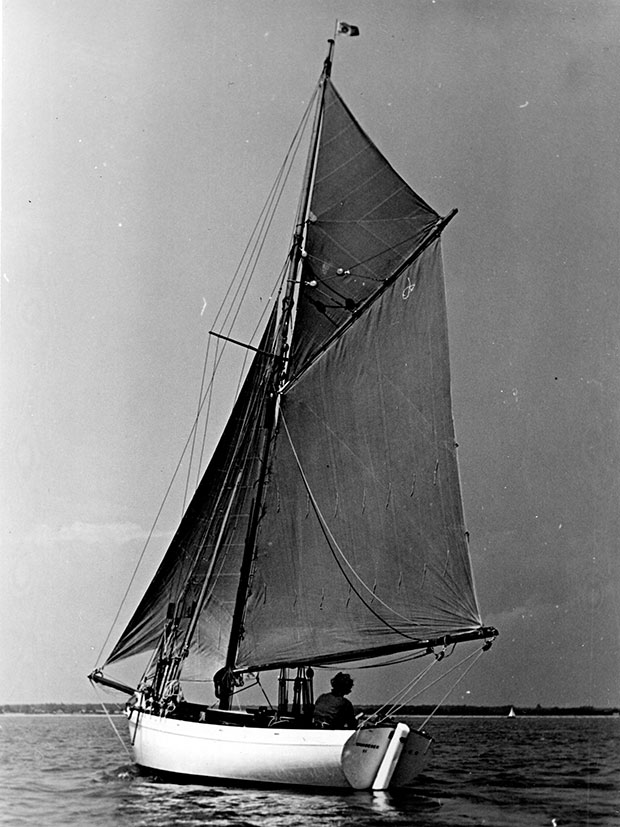 Wanderer II with Susan Hiscock at the helm.

The following year Sally II was built by Elkins in Christchurch, then Monie V3 in 1938 became the first of a series of seven close sister-ships to be launched before the War. One of these was Kawan V7 seen here sailing in the Solent. She later almost completed an extraordinary, mainly single-handed, circumnavigation before being wrecked on a reef in the Red Sea. 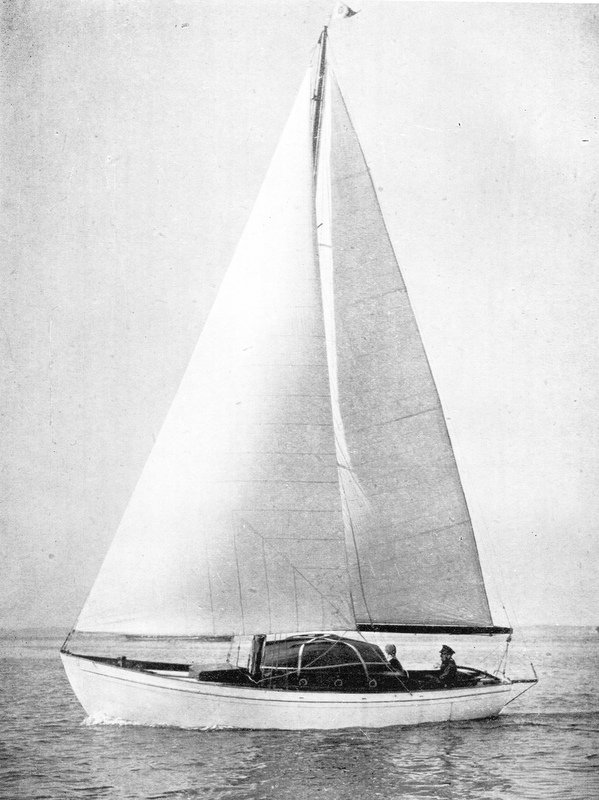 As far as I know, only a dozen Vertues built to this original design are still in existence, and one of them, Francolin, is now for sale. She was built by Kimbers in 1939 and is now one of three early boats currently based on the River Dart. The Wooden Ships brokerage have all her details but I can’t resist showing some photographs of this very shapely little ship here. She is a real gem. 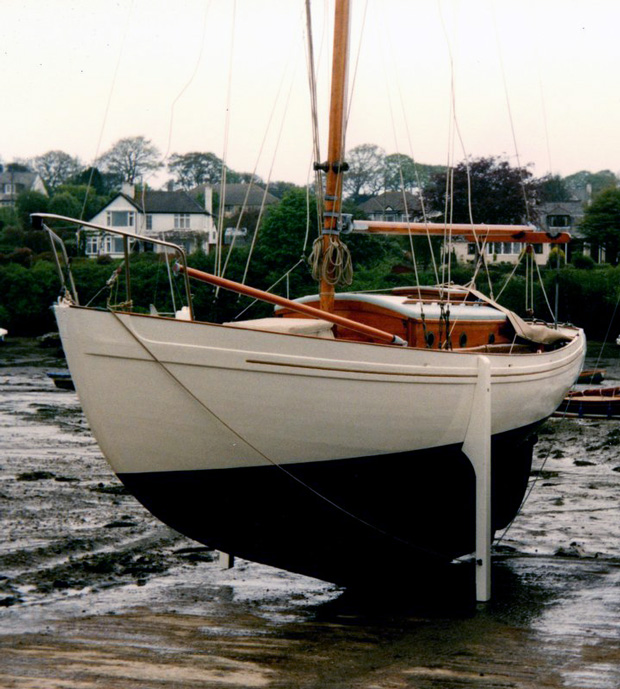 Francolin on her legs.

These early boats are so easy on the eye with their low freeboard, lively sheer and uncluttered appearance. They have got to be the most classic boats ever designed! If anyone would be kind enough to update me on the current whereabouts of Mary V9, Almena V10, Maid Meriel V11 or Kishti V12 I would be very grateful, and can then add them to the website database. Mary was built in Bridlington on the Yorkshire coast and survived a very strong gale in the Bay of Biscay in 1993 when owned by James Burdett, as was described by Peter Bruce in his book ‘Heavy Weather Sailing’. Maid Meriel was built alongside Arthur Ransome’s new boat Peter Duck in Harry King’s shed at the top of the slipway in Pin Mill. 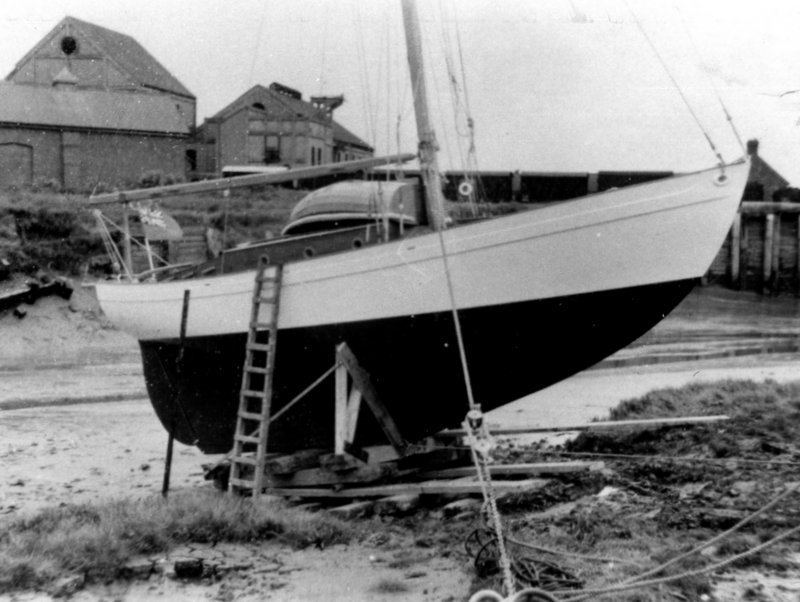 Francolin being launched in 1939.

One of the less well known ‘low coachroof’ Vertues is Wellow Maid with sail number V 31. She was ‘home built’ by ‘Jim’ Burnett who was so impressed by the design of Andrillot that he bought the drawings from Giles and set to work in 1937. Unfortunately, Hitler’s war delayed the work to such an extent that she was only launched in 1950, several years after the first of the Vertues with doghouses and greater freeboard had been launched.

Meanwhile, another self-building enthusiast who had also bought a set of drawings and a specification from Giles in 1937, was steadily building a Vertue up at Teesmouth on the northeast coast. Like Wellow Maid, her self-built construction took so long that her owner, Arthur Potter, eventually completed the boat to the updated post-war drawings, with doghouse included. I well remember seeing Maid of Tesa V34 anchored up river above Salcombe years ago and admired her meticulous and immensely strong construction. Having changed hands twice since her original ownership she is now for sale again with the Woodrolfe Brokerage in Tollesbury, Essex, where she is lying. 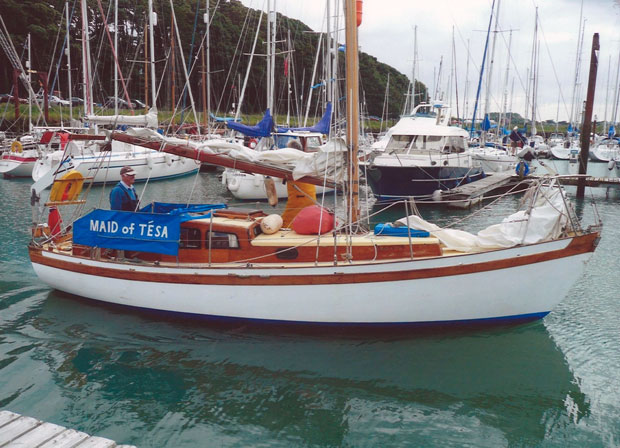 Although Arthur Potter started to build her in 1937 he only stepped the mast for the first time in 1953 whilst she was afloat! She has clearly been very carefully looked after all her life and is amazingly good value at her very modest asking price.

I reported in the May Newsletter that Merganser V47 was being restored and now I’m delighted to be able to show her afloat again after a clearly comprehensive and expertly carried out deep refit by Alan Williams. 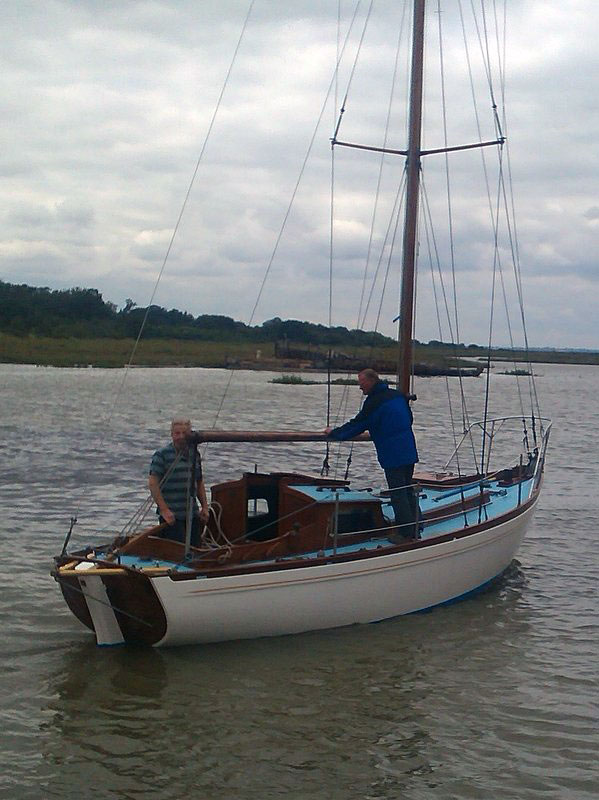 There are not many gaff rigged Vertues sailing today and even Andrillot was converted to Bermudan rig decades ago. However a couple of later ‘Vertue II’s were built with a cut down version of that rig, and both of them have rather prominent deck houses, much higher than the ‘ocean’ stepped coachroof design illustrated in the last Newsletter. One of them, Tegra V188, is also for sale with Wooden Ships and is lying on the River Tamar. Here is an image from several years ago showing her jogging along with her very snug rig off Plymouth. 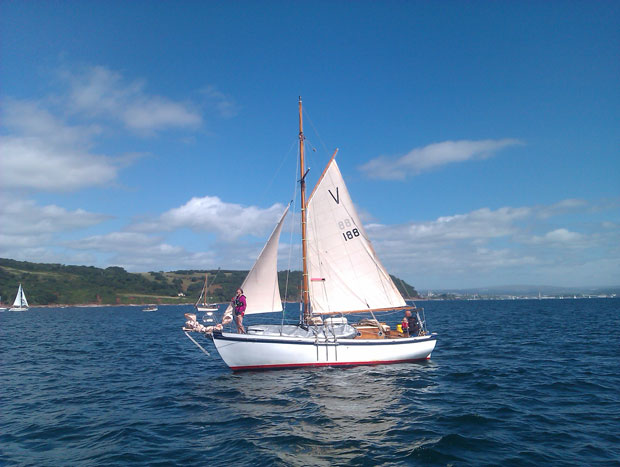 Tegra is yet another Vertue to have been built by her first owner, but unlike the other two ‘self build’ boats described earlier, she is a much later design. Her hull dimensions are the same as the grp moulded Vertue II’s but she is constructed using epoxy glued, iroko, strip planking. Her interior volume is enormous in comparison with the early Vertues but to my eye she lacks their daintiness and exquisite harmony of line. It is all a matter of taste, and it seems to me that there is a Vertue to match the taste of anyone who might be looking for a strongly built pocket cruising boat, capable of going anywhere, or just pottering about in the estuary.