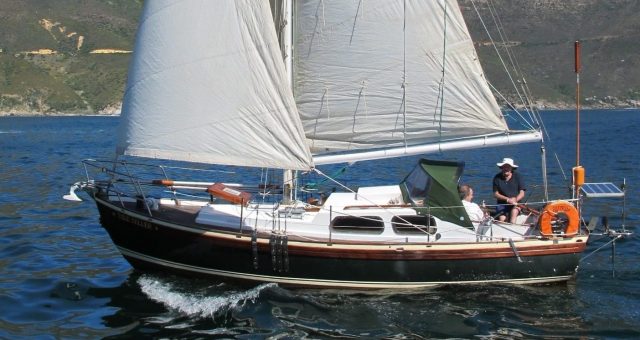 Here in our Island Kingdom, off the northwest coast of continental Europe, it is the shortest day of the year, amidst the gloom of the pandemic and the uncertaintly of our relationship with neighbouring countries. So what we need is a bit of colour, light and cheerfulness, and where better to look than SOUTH AFRICA!

So this Newsletter has become a kind of South African Vertue Feature!

We don’t get to hear much sailing news from that area of the world and it was only a chance tip-off by the inimitable Michael Vaughan, in Tasmania, that alerted me to the existence of a Vertue enthusiast living near Cape Town. In no time at all Roy McBride, of ckd Boats in Hout Bay, had filled me in about Tale Teller, and had introduced me to Frans Loots, who got me started with some basic info about several Vertues with South African backgrounds. This also lead to Daniel Brink who owns the lovely Vertue Carina, and I am very grateful to all of these kind folk for passing on their knowledge of their ‘local’ South African Vertues.

TALE TELLER (ex Aldebaran) V114. For several years one or two un-captioned images of this very smart-looking Vertue have appeared online, and I have been tantalised by the mystery of her background. So good did the finish appear to be in the photos that I even wondered if she might be one of the ‘unknown’ grp Vertues built by Bossoms in Oxford, and exported there, perhaps for local completion. Well, it appears that, in a way, perhaps I wasn’t so far off the mark, after all!

ALDEBARAN Was originally built in 1964 by Henry Vink in Durban, up on the east coast, and was named after that beautiful bright red, first magnitude, star in the constellation of Taurus, the Bull. Henry sailed her out to Mauritius and back before selling her to Noel Jacobs who then sailed her right around the world! When they were in New Zealand, Noel took the opportunity of sheathing the boat with kauri pine and epoxy, which perhaps explains the shiny smooth finish evident on her topsides! On returning to Hout Bay she was refitted by Tom Maben and renamed TALE TELLER. I hope that I will be able to find out more about her voyage, and especially the route she took, and the adventures they must have had!

WESTERLY V76 I’m sorry to say that this is not such a happy Tale to tell. She was built in England, probably in the mid-1950’s, and about twenty years later was owned by Fred Boynton, who set off across the Mediterranean and down the Red Sea, into the Indian Ocean. Unfortunately he was overtaken by very bad weather off the East African coast, sustained damage and limped into Port Elizabeth, before giving up on the adventure and selling the boat to Paddy Skelton. There she remained, in a shed awaiting a refit, before being sold again, and the agony continued. She is apparently now laid up on a farm near Port Alfred where her condition looks to be ‘terminal’.

Fortunately, there follows a third Tale to lift the spirits ever higher again!

VERTUE CARINA V135 Many of you will remember the name of Bruce Dalling, the dashing young South African sailor, who came second in the third OSTAR in 1968 with the rakish-looking ketch Voortrekker. I was living aboard my father’s Vertue Hoitak, working in Mashfords Boatyard near Plymouth before the race, and remember Bruce admiring her. I had forgotten that he too had a Cheoy Lee built boat, called Vertue Carina. By then Bruce had ‘delivered’ his Vertue home from Kowloon to Durban and on the final leg had been ‘pitchpoled’ in the Mozambique Channel and sailed home under a jury rig. This outstanding piece of seamanship resulted in his being chosen to skipper the ‘South African’ entry into the OSTAR. As a ‘shakedown’ he delivered Voortrekker from Cape Town to the start in Plymouth.

In 1969 Vertue Carina was bought by John and Karin Cross who sailed her down to Cape Town from Durban, through some typically ferocious Aghulas Current conditions. From there they ‘carried on’ to Denmark ‘to visit Karin’s grandfather’ before returning to work in Falmouth. Here a baby was born and they sailed back to Cape Town with the little child happily swinging in his focsle crib all the way! They subsequently wrote a book called ‘The Baby Boat’, which I am hoping to feature here one day!

The Tale of Vertue Carina might have ended there, for she fell on hard times, swinging, neglected, on her mooring in False Bay. Luckily, a few years ago, the owner of a beautiful gaff cutter on the next mooring, couldn’t bear to watch this slow death any longer, and bought the boat. Daniel Brink has explained to me how he is gradually restoring her and from this picture it looks as if she’s fallen into the right hands at last!

ZINGELLA V131 By coincidence, amidst all these stories of the South African Vertues, Peter Enticknap has also been giving me some information about the history of his boat Zingella. Built as Sekyd in 1965 by Robertsons of Woodbridge in Suffolk, she was initially sailed by John Ryley to Durban via the Red Sea and then sold to Ron Atkinson.

Ron sailed her up and down the wild eastern seaboard of South Africa as far as Mozambique, for many years. He eventually sold her to someone who was keen to use the boat to get some capital out of the country, and she was shipped back to the UK, where she has remained ever since. She was owned for some years by marine photographer Lester McArthur before being bought by Peter, who has done a lot of work to her. Unusually, she has a strong masthead rig with metal mast, twin backstays, and sets a big roller-furling genoa jib.

Of course no real description of South African based Vertues over time would be complete without mentioning Shirley Carter’s Speedwell of Hong Kong. Although they are now in New Zealand, who knows if an eventual return to African waters is on the cards. I have already written about Shirley and Speedwell before but it is interesting to note that the boat was owned by some celebrated owners when sailing in SA, including Judge Louis van Winson.

Seasoned followers of this modest website might have noticed that this third Newsletter of 2020 confirms that I am finally getting the hang of using WordPress. Having also retired from running my architectural conservation practice, I have been lucky enough to find some employment putting pen to paper in the cause of a wide range of sailing craft, as well as Vertues.

Please note that I am working steadily through the brief descriptions of all existing Vertues, under Boats, on the header toolbar. This will continue. My plan is also to try and publish Newsletters quarterly from now on. As ever, this depends on YOU continuing to feed me even more information on these amazing little boats and their exploits. If anyone wishes to send specific text they would like me to include, illustrated or not, don’t be shy, or hesitant: as you know the standard is not very high!

The next ‘issue’ will have an update on my old boat Kandy which Nick Waite is working on with wonderful patience, and a very intriguing ocean Vertue, Fionn, rigged as a gaff cutter not unlike that of the unfortunate Andrillot.

A SPECIAL APPEAL FOR INFORMATION There are only four of the original low coachroof Vertues that remain unaccounted for today. I would be very grateful for any information about them so that their records can be completed. They are:

MARY V9 Last known to be for sale a decade or more ago in East Sussex.

ALMENA V10 Only heard of many years ago, somewhere in NW England.