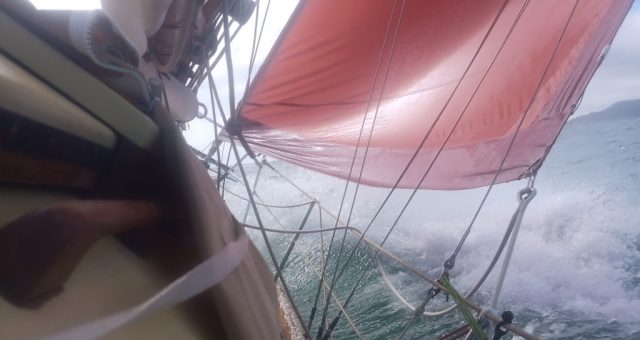 Here at VertueYachts we are just amazed at the valiant effort put in by Matteo and his two crew, Paolo and Mahoney, who each joined him for different legs. They drove Mea onwards whilst she had to beat nearly all the way, from Plymouth to Plymouth, making good around 1900 miles. Every time she started a new leg the wind had gone ahead, and Matteo was only able to use his spinnaker for a few hours in 36 days! For all the details, please see his excellent blog at https://measailing.wordpress.com/

Mea safely moored in Plymouth after beating for 1900 miles around Britain.

In recent months my convalescence has been wonderfully boosted by Vertual news from all over the world. Now that the challenge of recording the basic details of as many Vertues as possible that exist, ashore or afloat, some more details need to be added to many of their individual ‘pages’. However, it is clear that there will remain more so far ‘undiscovered’ sister ships, and one of these is Marion Grace. Her builder, (and owner until recently), very kindly sent a dossier of information about this Ocean Cruising Vertue to me, and from the pictures it can be seen that she is a close sister to the redoubtable Mea.

Ray King-Turner explained how he had taken on the partly-built hull in 1975 and finally launched her in 1980. Unlike so many Vertues, rather than being planked in one of the tropical hardwoods like teak or mahogany, she is built using that glorious, local timber, Kauri. (Our old pilot cutter Olga had been decked in kauri when she was built in Cornwall in 1909, so I have first hand experience of working with this queen of the woodlands.) As far as I know she is the only kauri-planked Vertue afloat, but I may well be wrong!

Here Marian Grace and Wanderer III are sharing an anchorage in Stewart Island off the south coast of South Island. I was lucky enough to meet up with Thies and Kicki Matzen aboard Wanderer III myself, in this anchorage, a decade later.

Marian Grace was built and based for many years near Lyttelton, South Island New Zealand. This east coast port will be forever associated with legendary departures for the early exploration of the great, white Antarctic continent. She was cruised all over New Zealand’s southern island, including here, in the far south, where she shared an anchorage with another legend of the oceans, Wanderer III. They make a fascinating study for Laurent Giles enthusiasts when shown together like this, as the two designs were ‘on the drawing board’ at the same time in 1950. What is interesting to note is that the main differences to their profiles result quite simply from their different size but in many other respects they could almost be sister-ships: rather than close, first cousins. The Ocean Cruising Vertues, being smaller, required higher coachroofs to provide reasonable headroom below.

I am sometimes asked if any new Vertues are ever built now. So I’m delighted to be able to report that Joop van Son has been in touch from the Netherlands with news of V 239. He says “This is the biggest 3D- puzzle I have ever done”. Having bought a garage as a building shed, in Gouda in the Netherlands, he is now cutting out bulkheads.

Bulkheads for the new Vertue which has yet to be named.

This is the ‘mast bulkhead’ and is called Frame E, so she is clearly going to have a coachroof-stepped mast.

Joop is taking the build slowly but steadily and will be setting up the building frame in the autumn. We look forward to being able to report on futher progress in due course.

As you know, Vertues are to be found tucked away in most corners of the globe, but we haven’t heard of any based on the Canadian east coast before now. Tern is a Bossoms-built, grp Vertue, and has recently been bought by Colin Bell in Berwick, Nova Scotia. Unfortunately there does not appear to be any evidence of the year she was built, nor when and how she got there. I have no information about how the grp hulls were identified when they were completed. Can anyone tell us, please?

Tern’s cockpit has plenty of varnished teak about it.

Aquila has lain afloat near Portsmouth for several years, in a sadly neglected condition………….until now!

I’m delighted to report that she now has new owners who have kindly sent some pictures of her ongoing refit. Aquila is a strip-planked Vertue and is a close sister-ship to Ocean Rambler, but was built by Rod Bryant in Chatham in 1990. Doesn’t she look smart already……….!

There are number of Vertues for sale in the UK and the immaculate Flying Fish is still available on the east coast of the USA. Yacht Brokers ‘Wooden Ships’ have details of the first of the grp boats, Vertue Voyager, as well as Vertue Fidelis and the second Ocean Cruising Vertue Ice Bird. All these boats can be found by merely typing their names into the newly updated Boat Search boxes that are on every page. This will take you to the ‘BOATS’ section of our website, which is now quite possibly the most comprehensive source of information about Vertues available. We can also usually provide more information about any of the boats listed.

Whilst all these boats for sale are in commission, one of the aims of this website is to help with the preservation of these remarkable craft. Some of them fall on hard times and the poor Eleanor of Poole has done just that. She was owned and restored some years ago by Roger Donkin, who then sold her with mixed feelings. To his dismay he subsequently heard that she was being totally neglected and lay virtually abandoned out in the open. He was recently able to buy her back, but has now found her to be beyond his skill and resources to restore for a second time. She is looking for a new home, and is currently lying ashore in South Wales. Please email me if you would like to take on a very worthwhile project. She is fundamentally sound with teak and mahogany planking and is one of the series of ‘long cockpit/short doghouse’ boats built by Newmans in the late 1940’s.

Now that we have completed the first draft of recording the basic details of most of the Vertues in commission, we are examining the origins of the design. As a sort of ‘overview’ I thought it might be interesting to explain my understanding of what I like to call the ‘Vertue Design Dynasty’. This involved the production by the Laurent Giles Partnership of a series of related and developed designs for cruising boats from the 1930’s to the 1960’s. This was later continued by the quite seperate design practice that evolved after Jack Giles died in 1969.

In future Newsletters I shall be looking at each of these designs, and others, and will even have a crack at trying to guess where Jack Giles might have gained some of his design inspiration for what was to become one of his most successful creations.

The Vertue Design Dynasty was first recognizeable in the Lymington L class boat Isabella, and the hull form was developed into those of Andrillot, and Wanderer II, over the winter of 1935/6. Of course Isabella had much lighter displacement at 2.7 tons, compared with 4.2 for Andrillot, so she had finer lines and consequently much less usable accomodation. I shall be looking at how the heavy displacement, short ended, transom sterned, essentially moderate and unremarkable shape was developed by the Partnership over the following years. The 28′ Kalliste appeared in 1937, to be followed by Valfreya, Fairlight and Dyarchy. After the War the design theme continued with the Hiscock’s Wanderer III, developed from Kalliste, and the Vertues emerging with replica’s of Wapipi’s doghouse from 1937, together with her revolutionary mast-step arrangement on top of her coachroof. The hull form was continued into the 1960’s and ’70’s in a few individual boats around 33 feet long and perhaps had it’s final flourish with the grp Giles 38 which appeared in 1972. By then, the forefoot ‘toe’ that was a profile feature of the RNSA 24, Normandy and Wanderer classes was less pronounced, and the design returned to the fundamental principle of ‘Moderation’ that characterised the whole Dynasty. (Of course the midship section of the Giles 38 was seriously modified from the pre-war model, with it’s angular transition from keel to bilge.) Nor were boats such as the shallow draft Peter Duck and the elegant Channel and Brittany classes part of this ‘dynasty’, even though they shared some design features common to so many Giles designs. Although it might be tempting to characterise these ‘dynasty’ boats as being in some way ‘central’ to the work of the practice, the Partners were also engaged in developing ocean racing yachts as extreme as Myth of Malham and the aluminium Gulvain. This dynastic strand was therefore one of many that was developed over the years by Jack Giles’ incredibly talented and prolific design practice.

There is little doubt that the general shape, and rig, of the early Vertues developed from that of the Isabella, the first of the ‘Lymington L’ class. Her sections are shown below, and make an interesting comparison with those of Andrillot.

Interestingly, only the hull of Andrillot, followed the earlier design of the Lymington L’s and she had much heavier diplacement. Her owner, Dick Kinnersley, required the rig to be that of a miniature, gaff-rigged, pilot cutter, similar to Eric Hiscock’s contemporary design commission for Wanderer II. Both these men were typical of the ‘pilot cutter enthusiasts’ who were well represented amongst cruising yachtsmen of the period. It wasn’t until the drawings of Monie were produced in 1937/8 that the more recognisable masthead bermudan rig became standard, although meanwhile, Sally II had also been built with this rig.

Here is Monie’s beautifully proportioned hull profile and sail plan. It is from these drawings that the design development of the Vertue class really started.

The much lighter displacement of the Lymington L class is illustrated by this photo of Mermerus L14 on the beach.

Thank you again to everyone who has kept in touch with all the news about Vertues worldwide: keep it coming, as we depend entirely on what you send us to be able to keep this modest little website going………!