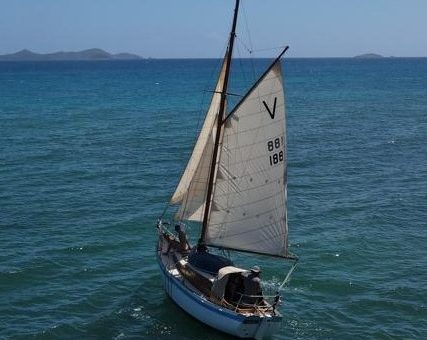 The first green leaves are uncurling from within the brown buds on the trees outside my window, urged on by the warm spring sunshine. I’m ashore for a bit of a refit just now, awaiting some new plumbing to the ticker, and dreaming of fair winds and blue seas………… like this lovely photo of the Tegra sailing up the Sir Francis Drake Channel off her home port of Nanny Cay, Tortola. So, I’m afraid today’s Newsletter will be rather short.

I’ve always had a particular admiration for the gaff-rigged Vertues, as regular readers will have noticed! Perhaps this is partly because my first taste of salt water was on the decks of converted Bristol Channel pilot cutters, like Marguerite. Here she is seen sailing into Salcombe, where she was professionally run by the Island Cruising Club in the 1960’s.

Marguerite sailing into Salcombe in 1960

Another pilot cutter I worked aboard was the Mischief. She looked very smart in Lymington before we left……

Mischief in Lymington, 1966, before we sailed.

Poor old Mischief in Montevideo with her bald-headed rig and peeling paintwork……….

Ten years later I had my own pilot cutter to save. We lived aboard the Olga and then spent a decade restoring her.

The elegant Olga on her legs ashore in Cornwall

Our lovely Olga in Essex nearing the end of her refit.

Andrillot, the first Vertue, was designed by Jack Giles for a “pilot cutter enthusiast” as a small gaff cutter. Her rig was altered to bermudan many years ago, but several other boats have been gaff-rigged. Fionn V140 was beautifully built in Australia and later shipped to the UK. Later on, in the 1990’s both Tegra and Natural Selection V 203 were built with snugger versions of the gaff cutter rig, and they were both given a modified, stepped, ‘ocean’ coachroof. I’m very keen to learn of any other gaff-rigged Vertues, as I’m sure there will be some more, inspired, perhaps, by the graceful appearance of the original Andrillot.

Tegra sailing out of her home port of Nanny Cay, Tortola, in the British Virgin Islands.

Meanwhile, up among the fjords and mountains of Port Townsend, Washington state, a third gaff cutter was being built. She was provided with a beautiful suit of sails by local sail maker Carol Hasse.

Canvasback was built in the Pacific Northwest and is now based in Juneau, Alaska.

As can be seen from this photo, Canvasback is a rare gaff-rigged Vertue that still retains her short coachroof, very much in the style of Andrillot. Her unusual name is taken from the local duck species that lives amongst the Alaskan fjords and waterways. I’m very grateful to local, Juneau, coastal rower, blogger, naturalist, Dick Callahan for introducing me to the Canvasback’s story so far! https://www.dickcallahan.net/

Keen Vertue cognoscenti will remember that the redoutable Kainui V 106 was based in Juneau before her long voyage around the world to the East coast of the USA. She has recently left for another adventure, as described in the December Newsletter.

Canvasback has a fine Shipmate Skippy stove; but then she is surrounded by Alaskan forests!

Canvasback is owned by Sarah Gering who has reluctantly decided to sell her in order to go commercial salmon fishing further north……..they make ’em tough in Alaska! Please get in touch with me if you might seriously consider buying this beautiful boat.