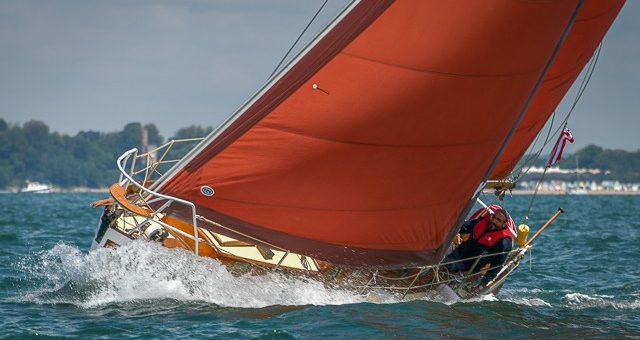 Mea charging west out of Plymouth Sound today, after the start of the Round Britain and Ireland Race: 29th May 2022. Good luck Mea!

(With thanks to Jon Dunsdon, owner of Hippo, Vertue 213, for the use of this splendid photo. Note that Mea is disguised as Sumara (V 198) thanks to the kindness of Alasdair Flint who has lent a mains’l for the race!)

The last time a Vertue crossed the starting line of a race in Plymouth Sound was when Cardinal Vertue did so at the start of the Observer Singlehanded Transatlantic Race in 1960.

Her skipper, David Lewis, embarked on many further extraordinary seafaring adventures all over the world. Cardinal Vertue later completed an astonishing single-handed circumnavigation of the Southern Ocean, south of the three great Capes, under Bill Nance’s energetic command.

Ten years earlier Vertue xxxv had been driven hard across the North Atlantic, against the prevailing westerlys, by Humphry Barton and Kevin O’Riordan.

Their sixth gale proved to be of hurricane strength and the little boat sustained some damage to her coachroof, but she survived and proved the fundamental seaworthiness of the design. Barton’s book of the voyage has since inspired many sailors, including Matteo Richiardi, not least because of Barton’s hard driving attitude to the enterprise. In particular, the appendix included some beguiling concept drawings for an ‘Extended Ocean Cruising’ Vertue that Jack Laurent Giles had prepared for ‘an enthusiast’.

A couple of years later the first two boats to this design were commissioned. Speedwell of Hong Kong was subsequently sailed back to England by Peter Hamilton and Icebird completed a comprehensive Atlantic circuit with Dr. Joe Cunningham. In 1956 Hamilton then sailed another ‘standard’ Vertue, Salmo, single-handed to Labrador. In 1959, Mea herself was completed by the famous Cheoy Lee shipyard in Hong Kong, and began her leisurely three-year cruise to England with her first owner Brian Bleasdale. So by 1960 half a dozen Vertues had already completed many thousands of ocean miles. Mea eventually reached England and in later years she made an Atlantic circuit under Swedish ownership, as can be seen in Matteo’s excellent website about the boat: https://measailing.wordpress.com/2022/05/06/2203/

About a dozen of these ‘Ocean Cruising’ Vertues have so far been built. The design was conceived alongside that of the Hiscocks’ Wanderer III, and is characterised on deck by the continuous, ‘stepped’ coachroof. Down below, the standard port side galley area, and the chart table space opposite were both enlarged, and the two saloon berths were placed further forward. Vertue xxxv’s deck stepped mast was still seen as cutting edge technically, so the Ocean Cruising boats all continue to step the mast on the keel, just like the earlier pre-war Vertues. The focsle is variously fitted out with a sea toilet, sail and gear stowage, and sometimes a folding pipecot or two for further crew members.

The original concept drawing shows a fully developed masthead cutter rig, with double working heads’ls. This departure from the more standard masthead sloop rig of most Vertues was not followed by many Ocean Cruising boats, although Icebird has retained it. Most other boats, have opted for metal spars and a more conventional, but arguably less flexible, masthead sloop with a large, modern furling genoa, but Mea has retained her beautiful wooden mast. In complete contrast, Shirley Carter’s floating home, Speedwell of Hong Kong, was re-rigged nearly two decades ago with an unstayed pole mast and modern Chinese junk lugsail.

They have continued to roam the oceans ever since and having crossed the South Pacific, spent time in New Zealand, are currently exploring the islands of Indonesia. Another very long term ‘liveaboard’ Ocean Cruising Vertue, Tui of Opua was built by Bruce and Thelma Morely in 1994 in New South Wales, Australia. They too have lived and cruised aboard ever since.

When Chris Larrewyn originally built his Ocean Cruising Fionn in Australia he opted to rig her as a conventional gaff cutter, like the very first Vertue Andrillot, and she has remained so ever since.

So every variation of the Vertue rig is represented amongst the dozen or so Ocean Cruising versions of this classic little boat.

Since starting to document the Vertue class over a decade ago we have identified nearly 240 Vertue sail numbers with a further 40 or so grp Vertue II’s. Of these, we have so far located around 150 that have actually been built, together with another 30 grp boats. They are scattered widely, with concentrations in Australia and New Zealand, on both coasts of North America, and a significant fleet is based on the Italian Adriatic. There are around 50 Vertues spread around the British Isles, with about 16 based in the West Country, 11 in Wales, Scotland and Ireland, a dozen on the East coast and at least 8 on the South coast. At least half a dozen are currently being refitted, some quite extensively. We are pretty sure that a significant number of boats have yet to be ‘found’ such as the very early pre-war Mary, or the Cheoy Lee built Alexia, but perhaps their owners prefer to remain incognito, and why shouldn’t they? After all VertueYachts.com is really only a bit of fun, merely a homage to one of man’s most exquisite creations………..

The start and finish in Plymouth of the Round Britain and Ireland Race takes place amongst the highest concentration of these boats anywhere in the world, and it would be good to salute Mea’s endeavour in some way. Obviously a fleet send-off would be nice, but Plymouth Sound itself will be a wild circus at the Start and this does not really seem to be a practical option. Depending on conditions on the day, perhaps an opportunity may present itself later on, but there remains the possibility of welcoming her back to the finish. As the boats’ positions will be readily available online throughout the race, perhaps this might be an option. I am circulating all the owners with each others contact details in an effort to help this happen. Alternatively, perhaps we might have a Vertual mini-rally in Plymouth when it’s all over. Please get in touch with your views.

Please note that it is now possible to look up the details of all known Vertues by simply typing the boat’s name into the search facility that appears on every page.

Please continue to send your stories and details of everything Vertual, and I’m sure you will all join me in wishing Matteo and Mea fair winds around our wonderful islands of Great Britain.