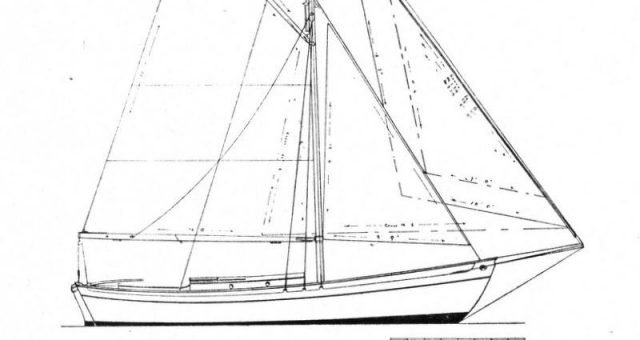 When Jack Laurent Giles was commissioned to design the little 5 tonner that was to become Andrillot he had lifted the lines, studied, and raced aboard the old French pilot cutter Jolie Brise. He also knew the British, converted pilot cutters such as Saladin and the old, transom-sterned Dyarchy, owned by his friend Roger Pinkney. By then he had also designed the little 23′ Isabella, the first of a small fleet of about 17 ‘Lymington L’ class dayboats, that were found to be ideal for a bit of racing and general pottering about, on the waters of the nearby Solent.

Writing in Yachting World in the early 1950’s he said:

“The Vertues originated in the little gaff cutter Andrillot, which was designed in 1936 for a Bristol Channel Pilot Cutter enthusiast, with, I believe, £350 to spend. We thought he would he would have a lot of fun getting wet on extended cruises in the Solent. So he did, up to a point, but he did not get nearly as wet as we expected, and he thought nothing of going across to the Channel Islands.”

From the drawing here it is clear that the early Vertues were designed to have ‘keel-stepped’ masts, a short, low coachroof and otherwise flush decks, pierced only by the seperate fore-hatch and cockpit aft.

Andrillot was followed by another 13 ‘low coachroof’ boats. Of these, two have since been lost at sea, and two more have been ‘lost’ to huge, ‘inappropriate’, alterations. The remaining ten boats are largely based in the UK, although several of them have stepped their masts on deck, for’ard of the coachroof. Of all fourteen pre-doghouse Vertues, Andrillot is the only one to have had her coachroof extended forward of the mast, as far as I know.

There seems to be some kind of blind-spot in the English psyche, fuelled by the likes of Barry Bucknell and his ‘diy’ successors, that enable them to totally ignore some of the fundamentals in the design of boats, buildings and other, lesser artifacts created by man. Can you imagine the Italian owner of an early Vertue countenancing that kind of desecration?

Perhaps I’m being over-precious about these boats? Please write and let me know if you think so. I remember, many years ago, being shocked when Eric Hiscock illustrated the two T. Harrison Butler ‘Englyn’ boats Naiad and Peradventure in ‘Cruising Under Sail’. The latter was shown with her clumping great ‘extended’ coachroof, ruining her appearance, below the stunning image of Naiad with her short, low coachroof of ‘normal height’, as Eric described it. It isn’t really ‘rocket science’ to be reasonably sensitive to the line and proportion of a given design, especially when there are plenty of other examples of sister-ships that have retained their visual integrity.

Perhaps the confusion in Andrillot’s case came from the development of the design of the Vertue that happened in 1946. During Hitlers war the Giles design office was disbanded and the partners all worked in their own particular fields for the war effort. After the Allied victory was declared, it was clear that ‘series production’ of yachts had a future, to satisfy the burgeoning demand for small, affordable cruising yachts. Folkboats lead the way but the Blackwater Sloops built by Dan Webb and Feasey, and the neat little ‘Z’ four tonners designed by T. Harrison Butler, were also starting to be built in growing numbers.

Perhaps to address this demand, the newly reformed Partnership revisited the old Andrillot/Monie design and remembered that a pair of much larger sisterships, designed in 1936, called Wapipi and Whooper had not fallen apart, as some had predicted, despite having their masts stepped on top of their coachroofs. If they could increase the freeboard of the Monie design, and step the mast on a proper coachroof, in a similar way to Wapipi, and somehow provide a small doghouse aft without completely destroying the ‘rightness’ inherent in the old design, they might have a viable contender for this new approach. Oh, yes, and let’s call them the Vertue class, after the cup won by Epeneta before the war. The log of her impeccable, engine-less, cruise to South Brittany had been submitted by Lawrence Biddle to the Little Ship Club competition committee in 1939.

The transformation that resulted from these few decisive and masterly modifications completely changed the capability of the little boats. Although it was to be many more years before the full benefits of the new volumes that had been created below decks were realised, this first layout in 1946 was revolutionary. With full standing headroom and a feeling of spaciousness beneath the doghouse, and nearly standing room right for’ard to the fore hatch, new owners could pull up their trousers with ease, without going on deck! It was assumed that these boats would have auxilliary engines, and a centreline installation was shown. The well-tried rig was left alone but the real genius of the new design is that the boat still exudes a sense of purposefulness, of chunky workmanlike capability, and of seaworthiness. She still looks ‘right’ and somehow, even the working boat ancestry remains clearly apparent.

The trouble was that everyone wanted this new version of the old sea-going ‘land-rover’ that the Vertue had somehow become. With hindsight, it is perhaps surprising that more owners of the ‘old’, low-coachroof, versions of the design didn’t do what the Stevensons did with Andrillot, and put the mast on top of the extended coachroof. One boat, Island Spell, did get the full treatment and now has a full coachroof and doghouse, and the photos of Charis show a less prominent but equally oddly proportioned deck structure abaft the mast. Of course, because of the lower topsides of the earlier boats, even putting the mast on deck and extending the coachroof doesn’t really begin to address the headroom issue. In my view it’s a ‘lose-lose’ situation, rather than a ‘win-win’.

These days it is usual for older boats to be carefully looked after by their knowledgeable owners and the sailing magazines are full of articles about these ‘classic boats’. This modest website is devoted to the enthusiasm surrounding the Vertue class and it is for this reason that I have felt it difficult to remain silent in the face of what has been done to Andrillot over the past couple of years. Whilst the joinery is amazing, the ‘restoration’ of a serious earlier mistake is difficult to understand.

It does seem to be especially unfortunate that, Andrillot, of all the Vertues in existence today, has been treated with so little respect. That she should now be nominated for a ‘Restoration Award’ in ‘Classic Boat’ magazine is totally incomprehensible.